June 05, 2010
It seems pooh brings out the best in people.  Well, not literally.  What I mean is give you guys a picture having something to do with pooh and the comments submitted are the best and funniest I've ever had the pleasure to read.

There were a shitload of good comments this week which made it hard to sort through them and pick a winner.  So this week, in addition to our runners-up, I've decided to do something a little different.  Yep, you heard me - another first here at nonamedufus - a three-way...a three-way tie that is.

So, flush with excitement, here are our runners up:


I just swam up from China and boy are my arms tired.


This is worse than New York's problem with rats coming up through the plumbing. 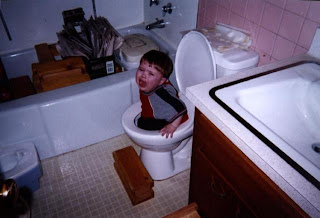 00dozo was simple and to the point.  She dropped this caption:


Revenge of the Turds

Tom bowled me over with:


I couldn't find the cell phone, but here's those Legos I threw in last week.
And Chris@Knucklehead dumped this one on us: 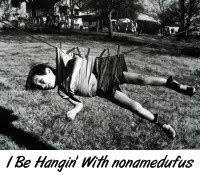 So congratulations 00dozo, Tom and Chris.  You guys be hangin' with the dufus!  Uh, anyone got any air freshener?
And to my drive-by followers, click on the links to visit these folks' blogs.  They're responsible for some of the funniest and most entertaining blogs on the www!

My apologies for leaving so abruptly earlier(the coffee worked). And, of course, sorry for my stinky acceptance speech, (da dump dump).

Dozo me, I forgot to congradulate my co-winners, Chris and Tom, not to mention the honourable mentionees. Big Phoopies to yous! (and I mean that in the most affectionate way ;-)
5 June 2010 at 11:31

Donnie said…
Wow! Three winners! Shows you what you what can be done when everybody puts out.
I have no clue what I was trying to say there. Congratulations to the winners anyway.
5 June 2010 at 11:43

http://howtobecomeacatladywithoutthecats.blogspot.com said…
Congrats to the winners... this one provided so many great captions!
5 June 2010 at 13:24

Ziva said…
Congrats to the winners and runner-ups! Poo really does bring out the best in people.
5 June 2010 at 16:11

Tgoette said…
Congratulations to all the winners! Truly some inspired captions this week. You guys really know your ...um...stuff.
5 June 2010 at 20:27

nonamedufus said…
Tgoette: Congratulations to you too sir. Others were funny and sewer you.
5 June 2010 at 22:10

Anonymous said…
Wow, I didn't realize you were posting again. I just saw on my Analytics account that I got a visit from here, and thought I'd come snooping around.

Glad to see you made it through chemo, and am looking forward to captioning some photos again.
5 June 2010 at 23:53

MikeWJ at Too Many Mornings said…
Good choices one and all, NoName.

Chris said…
All right! Victory is MINE! Well, along with the other two guys.

nonamedufus said…
Chris: No problem, even though Harry Chapin might be rollin' over in his grave!
9 June 2010 at 14:15

Don said…
Wow! Three winners! Shows you what you what can be done when everybody puts out.
I have no clue what I was trying to say there. Congratulations to the winners anyway.
12 May 2011 at 15:00

FreakSmack said…
Wow, I didn't realize you were posting again. I just saw on my Analytics account that I got a visit from here, and thought I'd come snooping around.

Glad to see you made it through chemo, and am looking forward to captioning some photos again.
12 May 2011 at 15:00