June 28, 2010
Prior to my recent stem cell transplant in April I spent four days undergoing radiation treatments.  Knowing I would lose my hair I prepared myself by getting my hair buzzed off.  But not too short.  The barber used a #4 clipper.

But the radiation treatments were delayed.  My hair grew.  And several weeks after the last radiation session I started to lose my hair.  But it looked pretty weird - short here, long there - so back to the barbers to get a buzz with a #1 clipper so that it would all be the same length.

This is a big change for me.  I'm used to longer hair, making a trip to the barber maybe three times a year.  But now I'm basically bald.  I wear a ball cap, not just to keep the sun off my head, but also out of modesty.  If I didn't wear the cap I'd surely feel conspicuous, think people were looking at me or worse, yet, laughing behind my back.

I needn't worry.  My own family laughs right in front of me!  My own wife lovingly refers to me as Mr. Magoo.

Case in point.  Last week was my eldest grandson's 4th birthday.  So we had him and his younger twin brothers over for a little party.  He's crazy for Toy Story.  We'd already just bought him a talking Buzz Lightyear character.  For his birthday we bought him a talking Woody character - you know, the one voiced by Tom Hanks.  The doll has 25 sayings, one each time you pull the string in his back.  I never thought Tom Hanks could be so annoying, but after 3 hours of "a cowboy without a hat is like a yodel without an oh-ti-doo" I think you understand what I was going through.

I once read somewhere that the average 4 year-old asks roughly 400 questions a day.  My grandson is no exception.  Now most of these questions are easy to answer.  But out of the blue he asked, "What happened to your hair, Grampa?"  Now before he'd seen me, my wife told him Grampa looked like Caillou - another of my grandson's favourite characters.  My daughter, his mother, says he watches it every day.  Now before I could answer came the next question, "Can I feel it?"  So we stopped in the middle of supper and I leaned over so he could rub my head for the next 5 minutes. 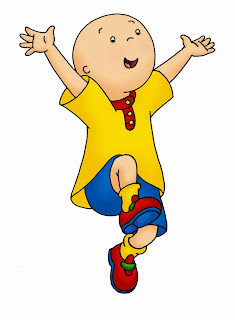 Later that evening, after everyone had left, my wife and I were laughing about the little one rubbing my head.  I confess she was laughing more than I.  And then she began to laugh uncontrollably, barely able to contain herself.  I said it wasn't really all THAT funny.  She said NO she wasn't laughing at that.  She was struck by how I reminded her - now get this - of a chia pet!  I love you too, dear.

Now if only it were as simple as just adding water.

http://howtobecomeacatladywithoutthecats.blogspot.com said…
A Dufus Chia pet? I've gotta have one of those! Hilarious!
28 June 2010 at 08:01

Hey it feels nice Nomie! Really it does.

I think you should start selling Nomie Chias. I bet they would sell like hotcakes. hee hee

And I feel for you daughter. I watched many hours of Caillou. It's a good show for kids, but oh, how I'd rather watch Law & Order! dun dun

RA said…
Hah! Get a tattoo at the back of your head and see if they dare to continue making fun of your hairless head. Your reputation in the neighborhood may be somewhat damaged, but the laughter stops...
28 June 2010 at 12:00

K A B L O O E Y said…
It's a dramatic change for you, I'm sure, but seriously: there are so many more white guys with shaved heads now, I wouldn't worry about feeling self-conscious. Got a giant one in my house right now. I love the #1 feel, but he likes to shave it all. It's his head. My mom's losing hers because of chemo that is just supposed to "thin" the hair, so she bought the requisite wig, but for a guy? Bald is in, baby. (Stepson suggested tattoo to his dad, however, of a little guy mowing the grass for the edge of his hairline. Problem is, hairline keeps moving down.
28 June 2010 at 14:12