BP Doesn't Want To Be Your Boogie Man

In a worldwide exclusive, our intrepid reporter nonamedufus has learned just how British Petroleum intends to successfully plug it's leaking oil well on the floor of the Gulf of Mexico.

BP, which most people believe stands for Big Problem Oil and Gas, has tried stemming the flow of oil with mud, cement and now golf balls.  WTF?  Yes, you read right - golf balls, even though there are many who feel the CEO of BP's balls should be used.

But now an outsider has stepped forward to offer up a solution.  John Travolta, well-known American philanthropist, scientologist and thespian - and star of the oddly successful movie Saturday Night Fever - has offered to donate his dianetic disco dance record collection. 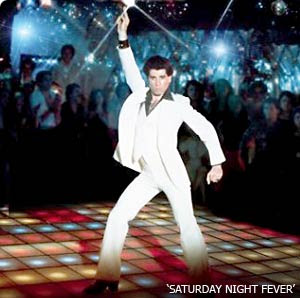 "Disco saved my life," said Travolta, "not to mention my career.  Once I convinced the church to allow disco into their dianetic philosophy, my life was never the same.   I guess you could say it really is responsible for me stayin' alive."

Few people know that Mr. Travolta has an extensive disco disc collection, estimated to be at over 100,000 records.  "That amount of vinyl means tons of viscosity and that's just what BP is looking for to stem the tide of gushing oil" gushed Mr. Travolta.

BP's plan is to melt down the disco LPs, and jam the whole viscocitious mess into the leaking pipe, a plan which many say should have been put into action back in the 70s.

BP's CEO, Phil Thehole, explained the new technical approach, "I don't want to be your boogie man but everyone knows that disco sucks.  If we do this right disco will suck the oil down to where it belongs.  From the dance floor to the Gulf floor, disco sucks, man!" 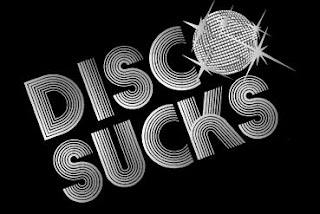 The Bee Gees soundtrack to Saturday Night Fever will be the first to go, followed closely by it's sequel Stayin' Alive.

All Barry White songs will be melted down as will any song by Gloria Gaynor, the Hues Corporation, Chic, Van McCoy, Donna Summer and KC and the Sunshine Band.

Said Travolta when asked why he was donating his entire disco collection, "Cause that's the way, uh-huh, uh-huh, I like it."

http://howtobecomeacatladywithoutthecats.blogspot.com said…
What about the disco ball? Is that going in the pipe, too?
4 June 2010 at 08:10

00dozo said…
Good idea CatLady! And I think we should throw in all of those disco clothes too!

Donnie said…
Too bad this oil mess didn't happen in the late seventies. First of all, we could have stopped 'disco' before it ever happened by taking all disco and shoving in the hole as it was produced. Also, Jimmy Carter was president so we still would have a president that politicizes the whole mess.... Long live the 70's. Groovy!
4 June 2010 at 09:36

nonamedufus said…
Don: I'm with you, Don. If only we had the foresight to stop disco before it happened. Instead, some of us have incurred permanent damage. *hums Get Down Tonight*. Did I just hum that out loud?
4 June 2010 at 09:48

Anonymous said…
"I will survive!" Yes, thanks for putting that Gloria Gaynor tune into my head.

nonamedufus said…
Quirks: You disco lovers are showing your stripes. I only mentioned artist names, but you have come up with the songs (and I use the term loosely) they performed. Ha!
4 June 2010 at 14:12

Janna said…
Disco balls and bell bottoms could definitely be the answer.
The oil will scream and run back the other way, sealing itself shut inside the earth until everyone who ever discoed is dead.

I might be in trouble, since at the moment I keep hearing the music from "Do The Hustle" in my head.

Nicky said…
How about all those sideburns and cheesy mustaches? I seem to remember my brother being able to clog our drains pretty good whenever he shaved...just a thought.
4 June 2010 at 23:16

nonamedufus said…
Nicky: Good one. I'd completely forgotten that aspect of the disco era. That'd provide lots of viscosity.

Did you know they're using human and animal hair in a panty sausage-like casing to absorb oil from the spill? Little girls here locally are canvassing hair salons, barber shops and pet groomers. True story.
5 June 2010 at 08:57

nonamedufus said…
Nicky: Good one. I'd completely forgotten that aspect of the disco era. That'd provide lots of viscosity.

Did you know they're using human and animal hair in a panty sausage-like casing to absorb oil from the spill? Little girls here locally are canvassing hair salons, barber shops and pet groomers. True story.
12 May 2011 at 14:44