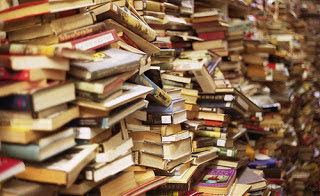 Well, nine books in August took me to the dizzying heights of 78 books that I've read this year. I seem to be on a pace of about 2-3 books a week.

It was an interesting month with much variety and included older books as well as recently released works.

Among my highlights were Roddy Doyle's 1987 The Commitments about a fellow who manages a soul/R&B cover band (you may remember the movie - and the great soundtrack) and the recently released - and hilarious - sequel The Guts that looks in on the guy many years later as he struggles with bowel cancer and is now in the business of managing former one-hit-wonder punk bands.

Half-Blood Blues was an exquisite novel by Canadian author Esi Edugyan about black musicians in World War II Germany and France and about the racism they encounter during that period. An excellent tale.

I read another R.J. Ellory novel this month. A Simple Act of Violence is the latest in a series of excellent, well written pieces of suspense that I've come to enjoy from this author.

And I picked up the next in the Robert Crais series of Elvis Cole detective novels, although what is #11 in the series is actually #1 about his sidekick, Joe Pike. Another satisfying tale in the pot-boiler genre.

Two more mentions. The first is the funny and enjoyable The Universe vs. Alex Woods by Gavin Extence about a young boy who suffers brian damage after being hit by a meteorite. I really enjoyed this recent release.

And finally, I came across a new release from Margaret Atwood, which I learned was the third in a series of books by this Canadian author. What did I do? I bought and read the first two books. Now I haven't read any of Atwood's stuff until now. But this borders on science fiction and takes place in a quasi-apocolyptic world or "dystopian" as the reviews indicate. Dystopian? Think of Utopian and then think of what the opposite might be. Anyway, I zipped through Oryx and Crake and The Year of the Flood and am ready to take on volume three, MaddAddam, as my first read this month. Here are the 9 books I read in August...

What about you? What have you been reading? Have you read any of these books?

meleahrebeccah said…
"I seem to be on a pace of about 2-3 books a week."

nonamedufus said…
I love reading. I put on a couple of CDs for background music, get comfy on the couch and away I go.
3 September 2013 at 15:38