I Put The Toilet Seat Down, Happy Valentine's Day

February 14, 2011
I took the Mrs. out for dinner Saturday to a romantic little bistro. It was preceded by an idyllic little afternoon walk in the snow. It was a head start on Valentine's day. I said to her, "Gee, I think the last time we were here the restaurant had a different name and we sat over there". "No" she said "it was over there and it was for Valentine's day." "Wow" I said "I'm so good to you...at least once a year."
But now it seems I may be romantic throughout the year, if I'm to believe what the vast majority of men think is romantic. 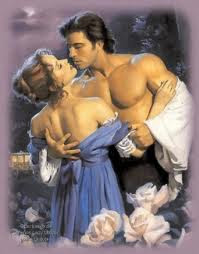 Me and Mrs D - in my mind.
A recent survey conducted by the firm Sainsbury's found the majority of men thought some very interesting activities constituted romance. Here are the top 10 and a comparison of how I've done:
Doing the ironing - ironing? What's that?
Doing the dishes - every day. After all it's the least I can do after she's paid for the take out.
Putting the garbage out - I'll put it in the bin during the week, but I let her bring the bins to the curb once a week because I know how much she likes to do that.
Doing the vacuuming - absolutely, when asked, sometimes.
Cleaning up after myself - well, yeah. The bathroom's a man's domain and I'm not that far gone yet.
Not farting in bed - how would I know. I'm asleep.
Agreeing to watching a chick flick - I don't mind the odd wildlife picture.
Offering to make a cup of tea - tea's a chick (different chick) thing.
Letting her watch what she wants on TV - oh, absolutely. That's why we have a second TV in the basement that she can watch anytime.
Putting a load of washing on - I've offered but ever since I shrunk half her sweaters and put my red socks in with her white blouse, I've been banned. (Good strategy, eh?)
It didn't make the Top 10 but another thing men think is romantic is putting down the toilet seat. This I excel at. It's been something ingrained in me ever since someone I know fell into the toilet bowl in the middle of the night.
Happy Valentine's Day, honey. I put down the toilet seat. I love you.

http://howtobecomeacatladywithoutthecats.blogspot.com said…
Aw, Dufus! You really know how to treat a girl. Happy Valentines Day to you and the missus!
14 February 2011 at 08:36

Kelly said…
Now see, I'd rather my menfolk leave the toilet seat UP and *I* will put it down. Because they don't lift the seat and guess who has to clean the mess?

Donnie said…
That's what I'm talking about. Glad that works for you. It didn't for me, but I'm much better off now than before. I don't have to buy flowers unless somebody dies.
14 February 2011 at 12:50

nonamedufus said…
Kelly: Your menfolk are so lucky to have you. Um, just how many menfolk are we talking about?
14 February 2011 at 12:56

cardiogirl said…
Mrs. Dufus certainly got one of the last gentlemen on earth. That's a really interesting list of what men think are romantic gestures.

nonamedufus said…
Quirks: I see this post as a public service. It helps men everywhere spice u their love lives all year long.
15 February 2011 at 08:08

nonamedufus said…
cardiogirl: Dryer? Hell I'll take those wrinkly blouses to the dry cleaners. Hell, I spare no expense for my iron-challenged spouse.
15 February 2011 at 08:16

StarTraci said…
My husband gets about a five. He definitely shares your view of ironing. And I have banned him from the washing after he washed a cashmere sweater with the towels and now fits my three year-old daughter.

nonamedufus said…
StarTraci: You know, sometimes you ladies don't give us guys enough credit. We try so hard but - as in the case of me and your husband doing the laundry - we fall down in the execution. But it's really the thought that counts. We mean well. Really, we do.
15 February 2011 at 13:31

Jen said…
Mrs Dufus sounds like a wonderful lady. It's good to know you do so much for her, I bet she really appreciates it.
15 February 2011 at 15:37

meleah rebeccah said…
Happy BELATED Valentines Day to you and the misses.
16 February 2011 at 13:53

StarTraci said…
My husband gets about a five. He definitely shares your view of ironing. And I have banned him from the washing after he washed a cashmere sweater with the towels and now fits my three year-old daughter.