April 06, 2010
Tiger Wood's redemption clicked into high gear yesterday.  Maybe it's coincidence, maybe not, but he held his big news conference to kick off his participation in the Masters the day after the resurrection.

Here's my view of how the news conference went using actual quotes from Woods.  Of course the quotes are totally out of context. 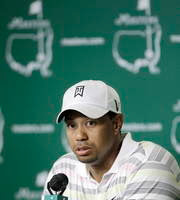 Masters defender or master deceptor
Tiger Woods sat down  with reporters yesterday and apologized to his fans.  Well, he apologized to a small group of fans...female fans  "I acted terribly...I need to change that. Going forward I need to be a better man than I was before."  Mistresses, past, present and future were thrilled to hear Tiger's words.  "Just because I've gone through treatment doesn't mean it stops."

Reporters were interested in the incident that brought Tiger's infidelities to light: the night he crashed his car on the street in front of his house.  "Winning golf tournaments through all of this is irrelevant to the damage I've caused." Woods totally destroyed his Cadillac Escalade.  And how did his wife Elin react?  "...a busted up lip and a sore neck.  That was about it."  Tiger confirmed he needed five stitches to his face. 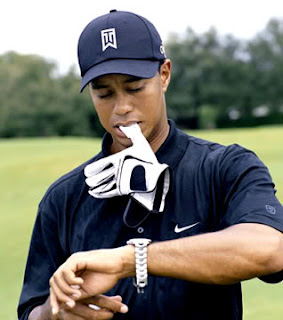 Oops, look at the time.  Gotta go.  Someone's waiting for me back at the hotel.
Asked how he felt about the fans' reaction to their first glimpse of Tiger since the sex scandal broke, he used an analogy from his cheating ways, "...it blew me away, to be honest with you, it really did."

Donnie said…
Hehehe. Yeah, only slightly out of context. It will be interesting to see how he fares this weekend.
You should have written for The N.Y.Times considering the manner in which you wrote that post. It's a gift...
6 April 2010 at 09:34

nonamedufus said…
UP: Hey it's his line. When something like that if offered up how can I resist.

00dozo said…
Funny stuff. Love the 'punchline' at the end.

As for the injuries he sustained, it could have been worse - instead of the "Big Bertha", his wife may have opted for the "Bouncing Betty". After all, both weapons involve balls.
6 April 2010 at 13:16

Chris said…
Honestly, I'm just tired of hearing about it. Yeah, he cheated. Big surprise, a rich athlete making extensive use of his putter.

Great approach, though, Dufus. Maybe a series of these using actual quotes from different scandals?

"So, Mr. Lincoln, how many times did you cheat on your wife, and when was your last affair?"

MikeWJ at Too Many Mornings said…
I didn't get the Easter connection. As jaded as I am, I am not jaded enough. I'm sure it wasn't a coincidence. Redemption for 18 holes in 18 holes. PR people are so smart these days.
6 April 2010 at 17:51

nonamedufus said…
Chris: Yeah, I'm tired of hearing about it too. That's why I just couldn't take it seriously. He's got the best PR experts money can buy and the whole thing was too smooth by half.
6 April 2010 at 18:04

nonamedufus said…
Mike: Did you know he hired Bush's former Press Secretary. I think there's a joke in there somewhere if you wanna use it.
6 April 2010 at 18:05

MikeWJ at Too Many Mornings said…
NoName, I think you just told the joke in a subtle, but oh so clever way. Brilliant!
8 April 2010 at 01:24