"Pull up your pants" I used to say to my son, barely into his teens, fifteen years or so ago.  It was the style in the 90s for guys to wear their jeans down past their hips with their boxers exposed for all to see.  It used to drive me nuts.  I often wondered how my son walked without stepping and tripping on his pant legs.  It was a rapper-inspired thing.  I chalked it up to the difference in generations.  In the 60s my generation used to wear tight jeans and we didn't listen to rap but it was music that drove our parents nuts just the same.

It made me think back to that old Dan Akroyd routine on Saturday Night Live from the 70s when, as the refrigerator repairman he'd bend over exposing his butt crack.  Back then it wasn't exactly a fashion statement.  Back then it was more a financial statement.  Akroyd was portraying a guy who couldn't afford a proper pair of pants...and for comic effect.

Well guess what?  Guys still aren't pulling their pants up.  I'm not talking about guys like me who have lost weight and are too lazy to punch another hole in their belt.  Although imagine me, on the lean side of 60, still in fashion.

No, I'm talking about school kids.  And while sagging pants have long ago stopped offending my  sartorial sensitivities there are others who think something needs to be done.

Take New York State Senator Eric Adams.  He's so bothered by sagging pants that he's cut a video and taken out billboards to "Stop the Sag".

And he's not alone.  People like Bill Cosby and Barack Obama have spoken out against saggy slacks.  Uh-huh.  I wonder though if they should be looking at the younger generation...or the older generation? 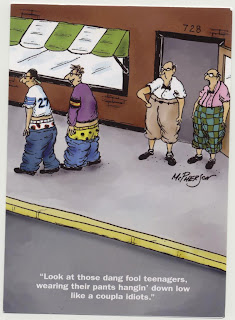 http://howtobecomeacatladywithoutthecats.blogspot.com said…
If those of us who are a tad bit older started wearing our pants like that, I'm sure the fad would be curtailed quickly!
2 April 2010 at 07:35

That little tune, performed at an American Idol audition, went viral. Why? Because they're lookin' like a fool with their pants on the ground!
2 April 2010 at 09:40

Kelly said…
Why, WHY I ask, do teens like walking around with the crotch of their pants at knee level so that they can't walk without looking like they're trying to keep from peeing.

My son and his cronies don't wear their pants like that (thank GOD) but their belt of choice is, wait for it, a shoelace. Seriously. A shoelace for a belt.
2 April 2010 at 10:47

PattiKen said…
I've always wondered how they managed to keep the pants from falling down around their ankles completely. Is there some sort of hidden suspension device?

A town in south FL that has a bit of a gang problem tried to ban the low-riding pants as a way of discouraging gang crime and violence. Town council voted down the proposal (perhaps with a little help from the ACLU).
2 April 2010 at 12:35

Lanita said…
Do you ever wonder why we call them the "Y generation?" Because their pants droop in the back and we can see the top of their Y.

nonamedufus said…
PattiKen: Ha, does the Bill of Rights give Americans the right to bear arms and bare bums???
2 April 2010 at 14:11

nonamedufus said…
Leeuna: I just spent the morning shopping with my wife, walking around pulling my pants up every 2 minutes. Maybe there's something to this saggy pants thing. Or I could invest in suspenders.
2 April 2010 at 16:08

Donnie said…
I saw an episode of "Cops" about six months ago. The driver of a car running from the cops stopped and jumped out of the car. It was a foot chase that lasted about 10 steps. He tripped when his pants fell to his feet as he was grabbing to hold them up. Seriously.
Loved the cartoon too. Perfect.
2 April 2010 at 17:27

Tgoette said…
Yeah that style of wearing pants looks stupid to me too. I see that and I can't believe that they think they look cool with their butt hanging out of their pants. I think they're morons, but then I'm an old (47) man, what do I know from cool?

K A B L O O E Y said…
I had that Pants on the ground song in my head for frigging WEEKS after seeing the guy on Idol and now Me-Me put the damn thing back in my brain. AARRRGGGGH!
2 April 2010 at 23:09

MikeWJ at Too Many Mornings said…
Leave it to you to point out something I'd never thought of before. Old man pants are just about as dumb as young boy pants. Over or under--I guess those are your options before and after the middle years. Good one, NoName.
3 April 2010 at 01:27

MikeWJ at Too Many Mornings said…
I think a kilt would be very comfortable. But I'm not tough enough to defend myself from homophobes.
4 April 2010 at 04:07

nonamedufus said…
Megan:If they're not trying to look like OGs than maybe it's not such a bad thing after all.
4 April 2010 at 07:47