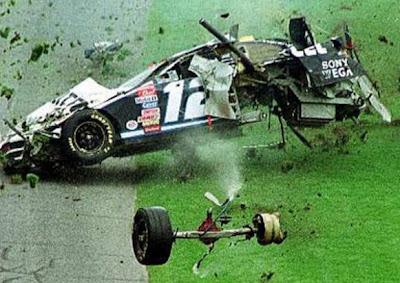 What is it about strapping yourself into a metal hull, donning a fiberglass helmet and hurtling around a race track at close to 200 miles per hour? There's a group of good 'ol boys who every weekend demonstrate to the world their need for speed once the anthem is away, the fly past is flown and some clueless celebrity issues that car racing catchphrase "GENTLEMEN...START...YOUR...ENGINES!!!"
Just what the hell am I referring to? Well unless you live under a rock or are a fey fashionista rather than a fast car freak you know I'm talking about the National Association for Stock Car Racing or more simply put NASCAR.
According to Wikipedia, NASCAR is one of the most viewed professional sports in terms of television ratings in the United States. In fact, professional football is the only sport in the United States to hold more viewers than NASCAR.. NASCAR holds 17 of the top 20 attended single-day sporting events in the world and claims 75 million fans who purchase over $3 billion in annual licensed product sales. All this for a sport who's claim to fame is 3 and-a-half hours of 40 cars going around in circles, never turning right.
And fans have their favourites. Maybe it's the king of the auto aristocracy Jeff Gordon. Or his team mate who's turned a little rough around the edges sartorially this year Jimmie Johnston. Or how about erudite-challenged Dale Earnhardt Jr. who stutters stops and starts...not just in the interviews but as he races round the track, too. Then there's former bad boy turned owner/racer Tony Stewart who's running number one in The Chase. Or my personal favourite Kyle "Bad Boy" Bush who drives that #18 car like there's no tomorrow. Kinda reminds me of myself when I jockeyed cars for AVIS Rent-a-Car during university.
Nothing quite compares to the exhilaration of a NASCAR race here in Canada, except perhaps one event. Regular readers will know from previous posts that Canadians are a little quirky. Their currency is a loonie, their national symbol a beaver and their revered rock star is Stompin Tom Connors. Well, the sport that rivals NASCAR up here is bathtub racing. You heard me right! But the tubs today are a little more modern than this one... 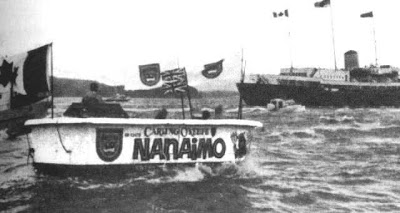 Bathtub racing began in Nanaimo, British Columbia in 1967 as a Canadian centennial celebration and every year since, the annual tub trek has occurred the last week of July. Not bad for a city who's previous claim to fame was it's link to the confectionery nanaimo bars and, by association, the "nanaimo look" - a 70s fashion statement made by my father and millions like him (like the swinger below) of a white belt and white shoes, usually used as accessories to his leisure suit. 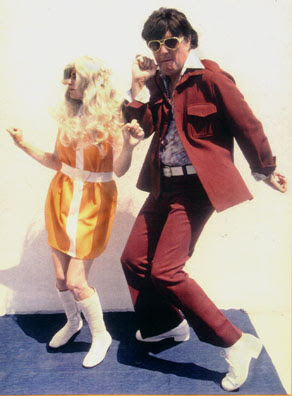 The Loyal Nanaimo Bathtubbing Society oversees (no pun intended) the annual event and "tubbers" from around the world spend in the area of $3,000 to make their tubs seaworthy to race the 36 mile course.
NASCAR's known world wide. You might say it's high tide (oooh) the Nanaimo tub race got a plug too! (puns intended)

Anonymous said…
Mmmmmm, nanaimo bars. So good. I wish I could say the same for NASCAR, but I just don't get it.

Hey, let's watch cars go around in a circle for hours at a time. No wonder they all get wasted to watch that happen.

Unknown said…
The Leisure Suits!!! Oh my God my father wore one of these. NASCAR? I live in NASCAR county, it is all these people talk about. I love the wrecks and that is it.
24 July 2009 at 13:29

Count Sneaky said…
What makes NASCAR work is not the colorful billboards they drive, but the personalites of the good 'ol boy
drivers who inspire devotion among fans that is equal to or more rabid than football, baseball, basketball and soccer fans and their stars.
25 July 2009 at 17:21

nonamedufus said…
John: Ha, ha - lawn-mower races. Did you ever see the episode of Home Improvement when Tim raced his lawnmower? Hilarious.
26 July 2009 at 14:31

MikeWJ at Too Many Mornings said…
I love Nanaimo bars--haven't had one in two years, sadly--and I'd much rather watch a bathtub race than a NASCAR race. God bless the Canadians! (I love hockey, too, and my son's going to the NHL!)
2 September 2009 at 02:32