July 15, 2009
In my youth I was an observant child, more so than most perhaps. To the point of aggravation to my parents, I'd often demand "why?" several times over in an effort to understand why (oops, there I go again) things were the way they were. My 3 year old grandson has the same affliction and I guess I know where he gets it from.


Many of those childhood memory "snapshots" have stayed with me over the years, being poked loose from time to time from the recesses of my cranium by current day occurrences. One such incident made me hearken back just the other day, forcing me to ask myself "why?". Actually, at middle-age the phrase is another interrogative that starts with a "w": wtf?


I was doing the weekly grocery shopping and was zipping up and down the aisles, making good time, when I and my basket came to a screeching halt. As I turned the last corner and headed for the front of the store and the cashiers I encountered the apocalypse. People and their shopping carts were everywhere, snaked across the front of the store. Why? Because only 2 cashiers were on hand to handle the hoards of harried customers.


I deftly circumvented the crowd and headed for the automatic check-outs. I don't know why they call it this because it's actually you the customer that checks out your own groceries as opposed to the cashier. Do you pay any less for this apparent attempt at express egress? No, but you can pay more at the rate of 5 cents per each plastic bag if you didn't bring your own. Alas, not unlike love, the true course of automated cashiering never runs smoothly and there were about another 20 people lined up to engage in technological supermarket sado-masochism. 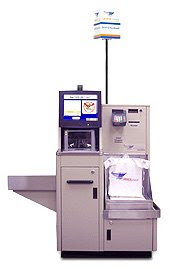 2 cashiers for 50 people? My middle-aged mind cried "wtf?". And here's where that innocent childhood memory came flooding back. As a young boy in the 50s I visited the barber on a weekly basis, as often as I went to church, to maintain my very cool brush cut. The shop was at the back of a small variety store where, with the change from my haircut, I'd load up on gumballs, licorice twizzlers and other candied confections, an Illustrated Classics comic book or a copy of Hot Rod Magazine. But the thing I remembered most about this picture of little boy bliss was the sign in the window of the barber shop: "Six chairs, no waiting." 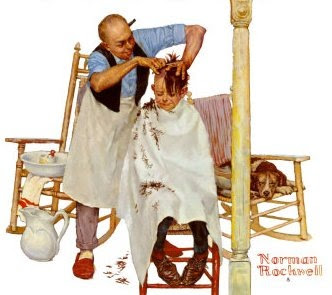 And it made me think. Lining up at automated grocery store cashiers, ATM machines, fast-food drive-throughs, self-serve counters and the like just doesn't make sense. Why in the world do things intended to speed us along at twice the pace in this modern world end up taking twice as long?


God I yearn for the days of "six chairs, no waiting". Why? Because.

I was in the grocery store a couple of weeks ago when this woman pulled up to the self checkout with about 100 items in her cart.

I asked why. I asked why no one was hitting her. Why the store doesn't have an item limit for the self checkout. Why I don't just go live in the woods and kill whatever I want to eat.
15 July 2009 at 08:24

Canadian Blend said…
We had a similar situation the March before last -- early in the month. (Yes, it was so traumatic I remember the month.)

There were too many shoppers and too few cashiers. This forced people who had never used self-checkout to give it a whirl for the first time and hold the rest of us up. Naturally, some of those people couldn't count and were in line with *far* too many items.

One guy, honest to God, seemed to have a cart full of things he got from another store. NOTHING he ran across the scanner would scan, so he'd pick it up, stare at it -- as if that would somehow infuse some sort of better-scanning magic in the item -- and run it over the scanner again. He finally figured out it worked best with the bar code facing the scanner.
15 July 2009 at 08:58

Anonymous said…
I have a love/hate relationship with the self-checkout.

I HATE it when you get that message. "Waiting for Cashier Assistance."

Winky Twinky said…
You are so right! At my local store, they do tend to have almost all of the cashier lanes open... but wtf?!? is going on when the store is jam packed no matter WHEN you go there? Don't people have anything in the world else to do but hang out at the grocery store?
15 July 2009 at 10:54

nonamedufus said…
John: That's one way of avoiding the auto-cashiers from hell.

Cdn Blend: I overheard one guy tell the auto-cashier supervisor "I don't think this bottle of Cike is $200". Ha ha ha.

Quirky: The one time I used one of these I breezed through scanning my grocieries but had absolutley no idea had to pay. Turns out I had to push "no bags" to get to the payment screen - go figure.

Doug: I agree, although my wife can zip right through them weighing and punching in fruits and veggies. Must be a woman thing.

Phil P. Bellemare said…
I try to avoid the "robots", so I bring in a folding chair and a book to wait in line. Sometimes I also bring a game of scrabble to play with other people in the line until we can finally pay.
15 July 2009 at 11:57

Unknown said…
I am not trying to be the ass of your comments, but 6 chairs no waiting only meant you did not have to wait to sit down. You still had to wait for three haircuts in front of you. Self check outs are supposed to save money. Whose are they saving? Not mine.
15 July 2009 at 22:11

I'll take my paycheck in twenties. :-) And although I don't need health insurance, I could sure use some dental..darn kids, ever since she started drinking those sugary coffees, my teenager now has 13 cavities.

nonamedufus said…
ettarose: No they had six barber chairs with 6 barbers and boy that place would hum on a Saturday morning!

Quirkyloon said…
I have a love/hate relationship with the self-checkout.

I HATE it when you get that message. "Waiting for Cashier Assistance."

nonamedufus said…
John: That's one way of avoiding the auto-cashiers from hell.

Cdn Blend: I overheard one guy tell the auto-cashier supervisor "I don't think this bottle of Cike is $200". Ha ha ha.

Quirky: The one time I used one of these I breezed through scanning my grocieries but had absolutley no idea had to pay. Turns out I had to push "no bags" to get to the payment screen - go figure.

Doug: I agree, although my wife can zip right through them weighing and punching in fruits and veggies. Must be a woman thing.