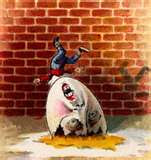 Over at Humor Bloggers.com where the funniest and punniest on the interwebs hang out - sort of like an AA for humour bloggers - Frank Lee Mei Dear of I Probably Don't Like You initiated one of my favourite Forum threads: The Humpty Dumpty Word Challenge. As Frank explains: "When I use a word," Humpty Dumpty told Alice, "It means just what I choose it to mean -- neither more nor less."
Frank challenged other HBDCrs to share in the forum random "Humpty Dumpty" words they've encountered on other folks' blogs when asked to enter a word verification, that jumble of letters required to be re-typed as a security measure, and to come up with our own definition for them.
Frank gave us an example or two to get us started. One was:
"tremotop"n. A hairpiece that has not been properly secured to the scalp.
Okay, you get the idea. Here's a few I've found and their Humpty Dumpty definitions...

...the practice of shampooing, to the point of near addiction. For example, Peggy Lee, who sang "I'm Gonna Wash That Man Right Outta My Hair" can be said to have practiced prelism. (Prell shampoo)

One who has been taught to be dishonourable; one given an ignobleness lesson.
ie: He was so dishonorable he could probably teach an ignesson.

You've heard of Google? This is the act of searching for change on the internet. 2 choices: "Coingl Search" or I'm Feeeling Lucky"

What an obstetrition does to confirm a woman's pregnancy = an o.b. dab.

These are the folks who enjoy swinging both ways...they're bi-likers!

Two of my favourites on the list include Ettarose from Sanity on Edge's entry:

ABLEO: What a pirate says when asked if he is able.

ASHOLE: He's not a complete asshole, but he's getting there.

And you thought humour bloggers had nothing better to do with their time!

Anonymous said…
Those word verifications have always annoyed me before - I will take more notice now!
29 July 2009 at 07:54

nonamedufus said…
Eternally Distracted: This is one way to make them less annoying.
29 July 2009 at 15:56

Winky Twinky said…
These were fun...I love word play, I've done a couple of word play things on my blog. I'll have to start writing these down...I actually had a really good one today, but guess I'll just let that be at the start of my list!
30 July 2009 at 11:11