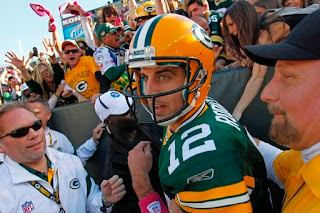 What's this? The guy with an award for the best 2012 draft in the Humor Bloggers Fantasy Footbal League LOSES in Week 1?

What's this? The guy with Green Bay's Aaron Rogers, the top ranked QB in the NFL (open for discussion), and who may have lost his game Sunday but nevertheless gave me 30 fantasy points LOSES in Week 1?

Well, um, yeah. Those questions were kind of rhetorical, eh?

I maintain it's Unfinished Person's fault. You see, Yahoo Sports got rid of their chat feature. So five of us followed UP around half the day Sunday from one chat room to another, downloading AIM-AOL chat (which didn't work), group chatting on Facebook, then at half time downloading and chatting on Yahoo Messenger. This whole incident of trying to find each other in various chat rooms was almost as entertaining as watching the football games. Well, it would have been if I'd been watching football games instead of chasing everyone all over the interwebs.

Sound lame? Okay well here are a few other excuses.

To my fellow Week 1 losers feel free to use one of them... 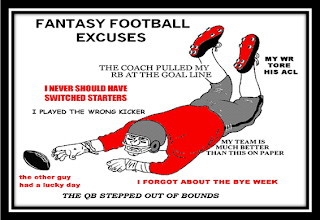