So there I am settling in to last Thursday night's Green Bay vs Chicago match up sharing mind-numbing comments on Facebook chat with Unfinished Person (his, not mine). I have the advantage over UP. I have satellite TV so I actually get to see NFL games live. UP has to prime his herd of hamsters to get that little wheel going so he can actually see replays on his computer. Thank God for replays, because we both almost missed this:


Uh-huh. Did you see that? You should have. It ran twice.

Green Bay lined up for a 3 pointer but punter Tim Masthay passed to tight end Tom Crabtree for a 27-yard touchdown.

"Tom who?" Unfinished and I asked each other. I checked Wikipedia. Crabtree used to play for the Packers practice squad. Practice squad for frak sake, before he made the line up as third string TE.

Wikipedia also highlights that he is:

Married June 28, 2009 to Chelsea Crabtree. Has a son Bryce Thomas Crabtree born October 14, 2010 and is expecting his second child, a baby girl. Tom Crabtree also has two dogs: Molly a Boston Terrier and Charlie a Pug.

No wonder they gave him the ball. No one on the other team knows who the hell he is!

And where was NFL MVP QB Aaron Rodgers in all this? Well, my Nancy quarterback - or should I say Evelyn - was over on the sidelines resting up after his all out effort to earn 12 fantasy points. Hell, my back up QB Ben Roethlisberger earned 21 points this week.

That wasn't all. I chose Chicago RB Michael Bush who earned 5 points to play this week. On my bench sat Miami RB Reggie Bush who would have given me 38 points. Yeah, I guess a Bush on the bench is worth almost 9 on the field.

To say nothing of how many Evelyns. Way to play Fantasy Football Evelyn. 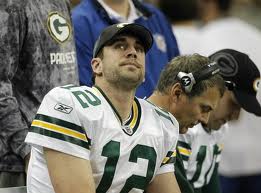 Indigo Roth said…
Hey Dufus! I scraped together a respectable 107 last Sunday/Monday, thanks in part to my edgy choice of Andrew Luck as QB. Oh, and I played Reggie Bush! HA! They thought I was mad! This week's dilemma? Raiders' Heywood-Bey or 49ers' Crabtree? Decisions, decisions. Hope Matt Stafford gets his shit together this week and starts hitting on my number 1 choice Johnson! Woo hoo! Indigo
20 September 2012 at 17:39

nonamedufus said…
Um, Meleah, I think you have to cover your eyes not plug your ears in order not to read this.