September 17, 2012
Sounds like a folk-group from the 60s, don't you think? Or a vaudeville act. But the three of us are far too young to have ever seen a vaudeville act, let alone been one.

Nope. Dufus you of course know. But Duford and Boom Boom are two fantastic bloggers I had the pleasure to meet this summer. Yeah. How about that. And both wonderful ladies at that.

Cheryl Duford hangs out at Deckside Thoughts. We met, virtually, through Ziva and Michael's 30 Days of Photos challenge back in April. I was amazed at the wonderful photographs she posted. I think she was surprised some guy named noname could actually take pictures on an iPhone. Nevertheless, we friended each other on Facebook and from there we planned on meeting up when Mrs D and I vacationed in Ogunquit, Maine. You see Ogunguit is just a short distance from Portsmouth, New Hampshire where Cheryl and her husband Running Man reside.

We agreed to meet for lunch. She was a good sport. She took us to a seafood restaurant. Of course, being a local, Cheryl hates seafood. Sorry, Cheryl. Next time you get to choose.

Mrs. D was relieved we'd be meeting in a public place. I mean after all she could be out to mug us or something. Au contraire, folks. Cheryl was a delightful individual. We compared medical maladies as folks of a certain age tend to do and talked about almost everything under the sun... blogging, politics, NASCAR, photography, you name it.

And then we hit the beach for a little photo session. I don't think that woman goes anywhere wthout her camera. 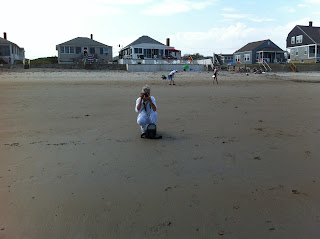 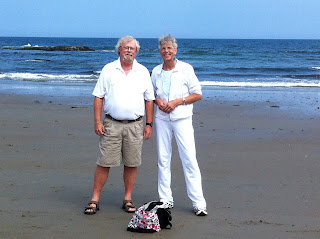 Now Boom Boom, otherwise known as Paula Larew Wooters, is from Rochester New York and blogs over at How to Become a Cat Lady...Without The Cats. I can't remember how we met virtually. Probably through the now defunct Humor Bloggers Dot Com. I do recall she was part of the Bloggerhood of the Travelling Book where several of us shared The Girl Who Played With Fire, each sending it on to the next person. It was Paula who sent it on to me. We, too, friended each other on Facebook and it was there I discovered she'd be camping out at A Thousand Islands, just on the border between Canada and the United States about 2 hours away. Now I had no idea how to find her. After all there are a thousand islands. That would be quite a search. So Paula and I worked out a date she'd be able to come to my place.

Now, truth be told, Paula doesn't just drink Dr. Pepper, which indeed I bought to entertain her. No, Paula likes wine and brought a couple of bottles with her.

Mrs. D, Paula, me and Henry the Wonder Dog, about the cutest pooch you ever saw, had a great afternoon and evening. BBQ'd steak and baked potatoes were for dinner.

Paula was a pure joy. We got on like we'd known each other for years. Brave lady. Driving all that way to come to my place where who knows what she might expect. Turns out she came prepared. In addition to Henry, she apparently had an ax under her car seat. Brave lady, indeed, because when they asked her at the border if she had any fire arms she said no. Well, I guess an ax isn't exactly a firearm. But it is a weapon! 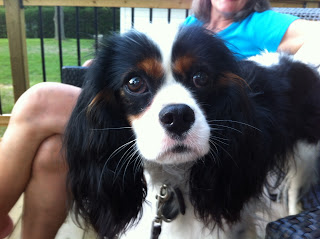 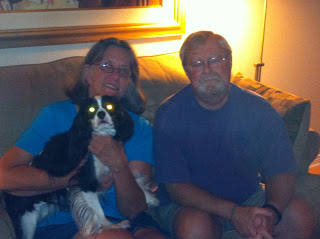 I have to say these encounters marked among the highlights of my summer. It was really neat to meet fellow bloggers and discover we have much more in common than just wasting our lives away on the internet.

Thanks ladies. I hope we can do this again some time. And hopefully I'll be meeting up with other bloggers in the near future...providing they don't carry a concealed weapon.

Boom Boom Larew said…
Hey... I left the ax in the car! We should start planning now for an East Coast (sort of) soiree next summer... we could make it a Vaudeville Extravaganza. I vote we all go to Nicky's house next! Or maybe Moooooog's. (Do you think we should tell them before we arrive?)
17 September 2012 at 07:38

nonamedufus said…
I tried hooking up with moooooog but he's a busy guy. And Nicky? She talks a good game but never lives up to her promises unless you live near San Diego.
17 September 2012 at 08:27

grosir baju muslim murah tanah abang said…
Excellent brief and this article helped me alot. Say thank you I looking for your
17 September 2012 at 12:28

Indigo Roth said…
Hey Dufus! So envious you've met Paula, she's a brick! I don't carry weapons, tho I am often being chased by a squiddrel, which is both indiscriminate and ravenous. If I'm in the area, I'll drop you a line! Indigo
17 September 2012 at 13:56

nonamedufus said…
You know, Indigo, there's something about meeting up with bloggers. When you do you feel like you already know them. And the two I was able to meet this summer were simply fantastic people, which only confirmed what I'd come to know about them through their blogging. Cool, eh?
17 September 2012 at 14:23

Nonamedufus said…
I'm usually going through town with family. We have to make this happen.
18 September 2012 at 21:23

Cheryl said…
For Paula's sake, I sure hope being a brick is a good thing.

nonamedufus said…
My apologies. But I bet you're just jealous you're not a baby boomer...although some might say you are.
19 September 2012 at 17:43

nonamedufus said…
You should talk to Maryse. She refuses to admit she's a boomer. She'd fall in that BBII period.
20 September 2012 at 15:10


Please tell Maryse it took me awhile to figure out I was a boomer, too. I was confused because my aunt is a boomer (1945) & I considered her to be of my father's generation (1937). Within the family, she is a generation older than I am. In the world, she's not.


The study about the differences between BI & BII is fascinating and spot on (at least in my experience of people I know in both groups).
20 September 2012 at 15:47