April 18, 2012
Don't forget to stop by dufus daze for our latest instalment of Pause Ponder and Pun. Katniss Everdeen has nothing on today's edition...

Meanwhile, in an unknown dimension found in a dastardly rip in the time-space continuum...

Welcome to 30 Days of Photos, where yadda, yadda, yadda, 18 hijacked hooligans bloggers are being forced unmercifully participating in posting a photo a day for a frakkin' month 30 days. Here are the other 17 suckers you can visit after you've been here: 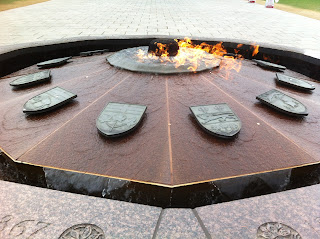 Okay, I know you guys have missed my little history lessons, so sit back and enjoy.

This is a picture of the Centennial Flame on Parliament Hill in Ottawa. It was built to commemorate Canada's centennial - hence the name - and unveiled in 1967 on, uh, the, like, centennial of our confederation in 1867. The shields of our 10 provinces and two of our territories rim the edge of the flame. Nunavut, our third territory is missing as it wasn't created until 1999. Up until then it was part of the Northwest Territories. (Disclaimer: I was the Director General of Communications at Indian Affairs and Northern Development when the government created Nunavut and oversaw the communications and public affairs associated with it - alas no shield in the fountain.)

Many visitors to the flame throw coins into the fountain that surrounds it. Odd, eh? These people pay taxes, then come to Ottawa and throw more money at the government. They won't be throwing their pennies in there soon as the government has decided to stop making them. Soon it'll be a nickel for their thoughts. Talk about inflation.

Quirky Loon said…
Nice pic Dufus. And I''ve mesmerized myself by saying the name Nunavut over and over again.

Unfinished Person said…
I hadn't even heard of Nunavut until today (off to Google). Really, thanks for the history lesson and also your own personal history lesson. I knew you worked somewhere in the government once upon a time. I just wasn't sure. As for the photo, I like how the flame billows (?) out from the center.
18 April 2012 at 09:47

Linda Medrano said…
Really nice photo and history lesson. I'm embarrassed how little I know about Canada. But you guys are just so low keyed.
18 April 2012 at 10:48

laughing mom said…
Cool fountain/flame and story as well! I may just have to cross that border sometime (after that 10 year ban is lifted on my passport - but we don't talk about that.)
18 April 2012 at 11:04

Katherine said…
I learned a FEW things in this! Throwing more money to the government...priceless!
18 April 2012 at 11:24

nonamedufus said…
Thanks, Linda. Sorry about being low-key. Sorry to be sorry. We Canadians are so damn apologetic. Sorry.
18 April 2012 at 12:12

laughing mom said…
Thanks - maybe you can meet me at the crossing and vouch for my character! We crossed over from Vermont to Quebec for a day trip about 15 years ago - before the time when the anal-probed you at the border.
18 April 2012 at 12:19

frankleemeidere said…
I have to admit, I always questioned the naming of that territory. I envision the conversation leading up to it as having gone something like this.

"Fine, fine, so they want a chunk of land that they can govern themselves. How much should we give them?"

Cheryl said…
Most days my thoughts aren't even worth a penny.

Cheryl P. said…
I always tend to come to the realization when I read about things "Canadian", I am a complete moron. I knew nothing about any of that.

I am assuming the throwing the coin in the fountain is the same as all the others, people think their wishes will be granted...let me know if that is the fountain that actually grants wishes and I will schedule my trip.
18 April 2012 at 12:54

00dozo said…
At least this is a piece of Canadian history I am familiar with, moslty Nunavut.

Speaking of coinage, I also heard about the penny, but have you seen the new commemorative quarter yet? It's rather creepy - I want one.

nonamedufus said…
Well I keep wishing for this government to be defeated but it doesn't seem to work. Judge for yourself.
18 April 2012 at 13:10

nonamedufus said…
The dinosaur that shines in the dark? Yeah, I saw a piece on the television news the other morning. Weird.
18 April 2012 at 13:12

frankleemeidere said…
I kind of figured that those behind the scenes must have had some fun with it. I'm still surprised nobody suggested a different name, though. I mean, I get that it means "Our Land," but maybe they could have come up with something less generic, like, "My government went to the Arctic and all they got me was this lousy frozen waste." Any idea what that would be in Inuktitut?
18 April 2012 at 13:55

frankleemeidere said…
Ha! Great minds. While writing that I was thinking, "Fuktuuveraggin."
18 April 2012 at 14:29

mikewjattoomanymornings said…
Nunavut is way the hell up there, and nobody from there will ever know if the government never puts their shield near the fire. So screw them.

And just how much money does it cost to keep a fire burning 24/7 in Canada, the world's coldest country? I think Canadians should instigate a revolt.
18 April 2012 at 16:18

Nora Blithe said…
I love how you often include pieces of Canada and its history in your photos. Being from the south eastern US, we don't learn a lot about Canada. I appreciate the tid bits of information.
18 April 2012 at 17:26

nonamedufus said…
Well, when you live in (or across the river from) the nation's capital it's easy to find something historical in the area. This region is rich in our country's history. Glad you enjoy my little tid-bits.
18 April 2012 at 17:38

Mike said…
I tried to lobby the government to include Canada's newest territory in the monument, but they were having Nunavut.

nonamedufus said…
You're having caption fatigue, my man. Quick, hop on over to my other blog before it fizzles out all together.
18 April 2012 at 19:29

MalisaHargrove said…
I love the combination of fire and water. Covers all of our primal urges. Well, most of them.

Nicky said…
Director General of Communications and you couldn't talk them out of naming it Nunavut?! :-)

nonamedufus said…
I had nothing to do with the name. If they had have asked me I probably would have suggested the Territory of Bob.
18 April 2012 at 22:10

nonamedufus said…
Yeah, cause it costs more than a cent to make a penny apparently. They'll save money on copper. And we'll all save money on tailors who have to sew up the holes in our pockets from carrying around so much loose change.
18 April 2012 at 22:12