April 01, 2012
If you're looking for our weekly Sunday Funnies feature it's over here for the month of April.

Welcome to 30 Days of Photos, where 15 bloggers are participating in posting a photo a day for 30 days. Here are the other 14 you can visit after you've been here: 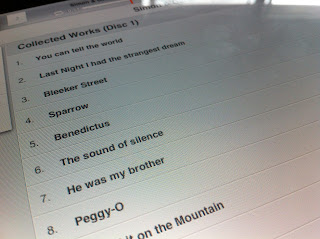 Do you see it? This is the playlist of the Collected Works of Simon and Garfunkel from the music app on my iPad. It's number 6, there. The Sound of Silence. Yep, that's my photo of "silence".

The song was first released in 1964 on the album Wednesday Morning 3 A.M. I was 12 years old back then. The song was remixed and "electrified" and re-released as a single a year later.

This was the beginnings of the so-called folk-rock movement when acoustic folk music became electrified.

The song is the second best-selling tune by Simon and Garfunkel after Bridge Over Troubled Water.

Ironic how a song called The Sound of Silence could actually make so much noise in the music world.

"Ironic how a song called The Sound of Silence could actually make so much noise in the music world."
1 April 2012 at 08:36

nonamedufus said…
Well this was a challenging one today but The Sound of Silence was the first - and only - thing that came to mind. I really like the way the light falls on my iPad screen, don't you?
1 April 2012 at 09:10

Quirky Loon said…
I think it's very admirable that you are taking this challenge. And I love how "noisy" your Sound of Silence post is.

nonamedufus said…
Yeah my submission is a "concept" piece. It's the photo and the post. I'd worked it out in my head (speaking of silence) long before I took the pic.
1 April 2012 at 10:08

00dozo said…
It's funny. I, too, was thinking about "The Sounds of Silence" for this first entry. Great minds, eh?

Love that song. Nice take on the theme.

nonamedufus said…
Imagine, I was 12 years old when that song first came out. The album bombed, S&G broke up, their producer "electrified" it and it shot up the charts. Which is a good thing. Otherwise S&G would have been very short-lived.
1 April 2012 at 10:20

Laughingmom said…
Nice concept! I have always loved that song and the thoughts behind it although I was 1 when it was recorded. I think we listened to it mostly in high school when S&G were having a bit of a comeback.
1 April 2012 at 11:01

nonamedufus said…
Funny that Garfunkel only sang and didn't really contribute to the songwriting aspect. This song could be about him, maybe.
1 April 2012 at 12:48

nonamedufus said…
Now you're confusing me Jayne. I always thought it was "if a bear farts in the woods does anyone hear it?"
1 April 2012 at 12:52

Mike said…
Especially the part about the words of the prophets being written on the studio walls. That probably translated into, "Art, you're fired."
1 April 2012 at 15:58

nonamedufus said…
That's better. Because I think in your version he would have told Garfunkel that was the last time he was paying for his mass transit fare.
1 April 2012 at 20:11

meleahrebeccah said…
I've come to talk with you again
Because a vision softly creeping
Left its seeds while I was sleeping
And the vision that was planted in my brain
Still remains
Within the sound of silence
1 April 2012 at 20:25

mikewjattoomanymornings said…
Sounds of Silence was the second or third album in my collection, and I actually looked at the lyrics hoping they'd inspire me in this non-competition. Clever work, NoName!
1 April 2012 at 21:33

Kristen said…
It is ironic how the "sound of silence" became so loud. Great picture for silence. Great mental image. I'm playing to. Hope you stop by and see my "silent" picture. Kristen from A little something for me
1 April 2012 at 22:41

nonamedufus said…
Thank you sir. You might say that the vision that was planted in my brain...still remains.
2 April 2012 at 08:50

nonamedufus said…
Yeah, it might be an ear worm but it's a pleasant ear worm. It's been running through my head since I first posted it.
2 April 2012 at 08:51