If I Had Kim Kardashian's Ass 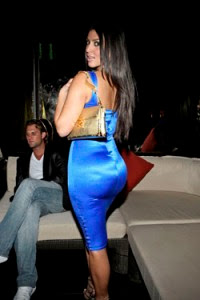 I’m sure Kim Kardashian is a wonderful person. I mean being a reality show harlot and a sex tape queen aside – two essential celebutante assets, to be sure – I’m certain she’s a very nice individual, entirely worthy of being a BFF (Biggest Fanny Forever) to Paris “That’s So Hot” Hilton.
Speaking of two assets, there’s no doubt when snapped from behind by the pursuing paparazzi who those ass cheeks belong to. Uh-huh. None other than double K. She’s got it all over J- LO and Beyonce. All over. And that’s saying something ’cause those girls are really out there in the BAAS – Biggest Ass in America Sweepstakes.
Kim and her ass are so lucky compared to me and my boney rump. If I had KK’s ass…
1) sitting on a sharp object would go largely unnoticed
2) it wouldn’t go to sleep while sitting on the toilet
3) you could fart in public and not worry about it finding it’s way out until 3 days later
4) it would give new meaning to being cheeky
5) hell, it would give new meaning to turn the other cheek – “Look out. Step back. She’s getting ready to turn the other cheek!”
However on the down-side:
1) she has to grease up every time she wants to slip into a pair of jeans
2) she buys her thongs from Omar the tent maker
3) on the dance floor she’s never asked her to shake her booty
4) when she backs up she emits a “beep-beep-beep” sound
5) TSA agents fight over who gets to do the cavity search, in fact I think one might already be trapped in there
You know Kim’s a rich kid. But while she comes from a well-to-do family she says she’s had it hard. Between you and me I tend to think she’s never had to work her ass off, if you get my drift.
After all is said and done, though, I think you’d have to admit that’s one posterior for posterity. 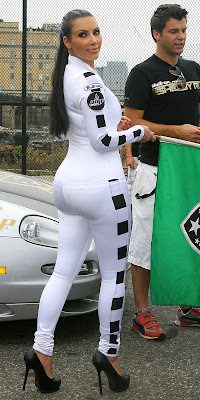 This post about protruding posteriors first appeared at The Parody Files.

Jon Hanson said…
That is so true. She's asstastic, buttrageous and reartendous all at once.

I may have coined one of those words, not sure. I'll always get 'behind' a post about rear ends.

nonamedufus said…
Simple Dude: I think you've just about said it all. You know there's a ceratin dairy air about her, too.
3 December 2010 at 08:22

http://howtobecomeacatladywithoutthecats.blogspot.com said…
Wow... KK makes my fat butt actually look kinda small. I'd have it all over her if the rest of my body didn't match my ass. But then again, the poor girl's had a hard time in her life so I really shouldn't be hatin'on her. Maybe I should send her something from my disability check.
3 December 2010 at 10:03

nonamedufus said…
Boom Boom: I have to admire how she manages to stay on her feet. With a tush that size I'm surprised she doesn't fall flat on her backside more often. Maybe she could borrow your crutches and use them as stabilizers.
3 December 2010 at 10:12

Malisa said…
But, but, butt...never mind. I tell you what...when she hauls ass, she has to make two trips!

Please come over and play on my blog today! I need some creative souls!

nonamedufus said…
Kelly: Why do they call it cellulite? On her it sire looks celluheavy!
3 December 2010 at 16:21

It should be painted on a mural somewhere. Everybody would stop and ponder at the wonderous butt.

I know I would!

nonamedufus said…
Quirks: Ha ha. She has an ass big enough for two blogs! And you've commented on both of them.

K A B L O O E Y said…
She looks like someone R. Crumb would have drawn. I have to say, I think all of those sisters are beautiful. I don't know anything about them except that Bruce Jenner's their stepdad, and HE is some scary-looking plastic surgery nightmare. The girls, though? Beautiful.
3 December 2010 at 22:02

MikeWJ at Too Many Mornings said…
I have to admit that your headline led me to believe this was going to be an entirely different post, one that Mrs. NoName might not approve of. But you pulled it out of your ass in the end, so to speak, and cracked me up. You're a cheeky monkey, NoName.
4 December 2010 at 01:38

nonamedufus said…
KABLOOEY: Are you part of that family? I just googled Jenner and learned ALL his kids names start with "K". Boy, that's really kute!

MikeWJ at Too Many Mornings said…
I wonder if her ass has a gravitational pull all of its own?
7 December 2010 at 01:01

Simple Dude said…
That is so true. She's asstastic, buttrageous and reartendous all at once.

I may have coined one of those words, not sure. I'll always get 'behind' a post about rear ends.

nonamedufus said…
So, like, your grandmother could give this clueless wonder a run for her money?
20 May 2012 at 14:22


Just read this while choking on laughter to my husband who said,
"Who wrote that?" with a large measure of incredulity in his voice.

nonamedufus said…
Well it wasn't too difficult to be funny about this. Look at what I had to work with!
15 September 2012 at 12:22