The Princess and the "P" 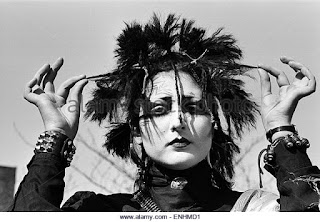 Penny was precious. A bit of a princess. All her life she'd been a little bit of a prima donna. She was pretty, sure. But it was more than just physical. To some, she could act in a preposterous fashion. To others, she seemed petty. But when all was said and done Penny was preoccupied with herself.

In her teens she was a punk with purple hair, pancake makeup and pink pullovers. She wore yellow pumps and stockings with tiny pin holes. And she had plenty of piercings. Needless to say her presence left something to be desired.

Penny's mom Pat and father Peter were at their wits end over Penny's appearance. And they worried too about the pals she chose to hang around with at public school. Pressed to explain Penny's comportment to her friends' parents Pat and Penny would pose such responses with the proclamation that "It's just a stage" and "Oh, she'll grow out of it."

Penny's parents must have been perspicacious because their little prima donna grew up, got married and got pregnant. Unlike her teenage years when Penny was profane, perverted and a few things unprintable, Penny changed. Largely due to Paul.

Penny met Paul in Panama. And on their return to the United States picked, of all places, Pennsylvania to live and raise their progeny. You couldn't find a more proper gentleman than Paul. He was a little prim, somewhat priggish but totally personable and pleasing. The perfect pairing for Penny. Paul worked at a well-paid profession and provided well for his paramour Penny.

When their son was born did they name him Percy? Possibly.

This week's challenge from Tara at Two Word Tuesday was perspicacious/perceptive. And if you think my interpretation has wound up you are, indeed, perceptive.