South of the Border

March 28, 2009
My buddy and I lit out from Fort Lauderdale at around 1am this morning. 16 hours later, after sharing driving duties, we checked in to the Quality Inn in Petersburg Virginia. It was a fairly unevenful ride, in fact a tad boring save when each of us started to nod off during our stretch at the wheel. One remarkable thing was the billboards in the sky. These things are mounted on huge metal poles up so high in the air I think they're used to attract low-flying objects as well as cars.

The other interesting thing to watch for are the billboards - all lower to the ground - for "South of the Border" a touristy kitschy mecca in South Carolina just over the border from North Carolina. You can follow these billboards as you get closer and closer, beginning over 160 miles away... 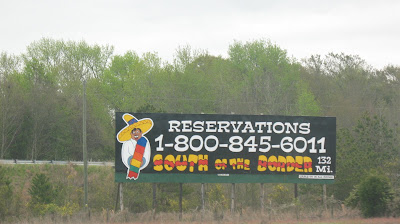 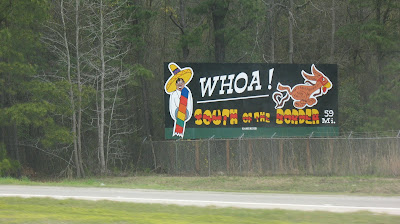 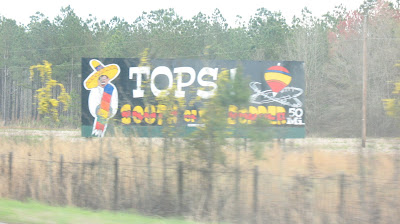 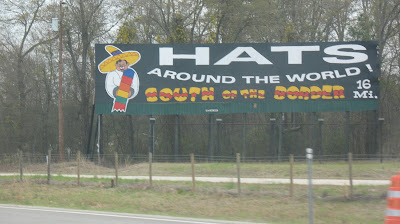 And then, before you know it the mecca of kitsch is upon you. 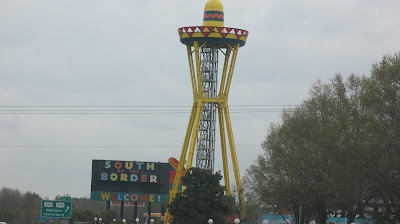 You know, I remember travelling with the kids when they were younger, driving to Disney World and those billboards provided us with hours of fun seeing who could spot them first and reading the silly mesages written upon them. We even stopped to see what all the fuss was about. Today, however, with two old farts bent on making good time, South of the Border was gone in the blink of an eye. Besides I'm really not one to kitsch and tell...;) 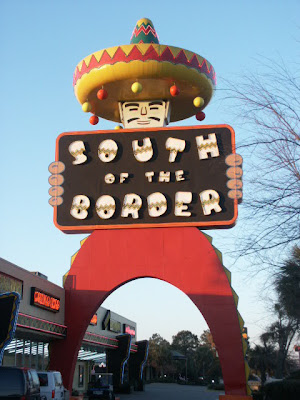 Mary@Holy Mackerel said…
I have got to visit this place next time I go across the border. Looks awesome!
28 March 2009 at 20:47

Shawn said…
Oh man, thanks for this. We used to play the same game with those signs when I was a kid. I couldn't believe the letdown of the actual place after all that buildup. It was my first lesson in hype.
28 March 2009 at 23:45

Unknown said…
We live in central florida, my MIL lives in NC.. when we go to visit her, I LOVE watching for those signs. My favorite is the car flipped upside down on the sign. They never get old for me... they might though, if we ever stop to see the place.
29 March 2009 at 12:30

The Exaggerator said…
Meanwhile, in my neck of the woods (the Midwest, as it were), Wall Drug Store and the Wisconsin Dells area (especially so the Tommy Bartlett Thrill Show, Noah's Ark waterpark and Riverview Park and Waterworld) have rather kitschy billboards as have become legends in their own time....
29 March 2009 at 18:39

Da Old Man said…
The funniest sign of all is the one just past South of the Border. It said something to the effect that you just missed it. As if that was at all possible.
:)
29 March 2009 at 19:29

Moooooog35 said…
You figure that they could just hire illegal immigrants to hold up sandwich boards.
30 March 2009 at 09:39

Shawn: Memories are made of kitsch.

DOM: Yeah, good one. My fave's You never suasage a place - Everyone's a weiner.

Jenn: Canada's got a few crazy landmarks: The "Big Nickle" in Sudbury, Ogopogo in B.C. and Potato Head in Fredericton are 3 that come to mind.

mbbambina said…
We even stopped to see what all the fuss was about here. Today, however, with two old farts bent on making good time.
17 July 2012 at 10:31