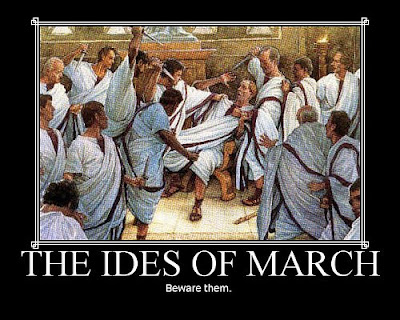 Beware The Ides Of March

Ah, yes, the Ides of March or the 15th day of the third month. Yeah, I know it's only March 14th. But it would be too late to beware if I told you tomorrow. The phrase is best known as the fatal warning given Julius Caesar, prior to his assassination.

Julius Caesar has heavily influenced our culture and society in ways you may not have known.

For example, Julius Caesar is a tragedy by William Shakespeare, believed to have been written in 1599. It portrays the conspiracy against the Roman dictator of the same name, his assassination and its aftermath. It is one of several Roman plays that he wrote, based on true events from Roman history. 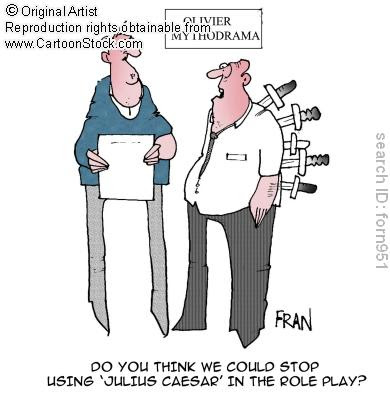 Caesar seems to have been the originator of the phrase “We have not to fear anything, except fear itself,” spoken to his wife on the eve of his death. FDR nicked the expression for an inauguration speech in the depths of the depression in 1933 when he said “…we have nothing to fear but fear itself…”

Julius Caesar is responsible for a very famous idiom. He literally “crossed the Rubicon”, which is an expression used down through the ages to exemplify when one passes the point of no return.

Julius Caesar said “I came, I saw, I conquered” He might have been referring to the fact he was married 3 times.

He may have heavily influenced Richard Nixon because he said: “If you must break the law, do it to seize power: in all other cases observe it."

We know he preferred listening to Jerry Garcia and the Grateful Dead over Frank Zappa and the Mothers of Invention because he said: “It is not these well-fed long-haired men that I fear, but the pale and the hungry-looking.”

And we certainly know he enjoyed eggs. When asked on the morning of his death if he’d eaten eggs for breakfast he replied, “Ate two Brute!”

Caesar and his pals (including a young Marlon Brando) got the Hollywood treatment in 1953...


And he served as an inspiration to comedians. First up Monty Python in this short wordless wonder…


And to conclude, this longer yet classic routine from the Canadian comedy duo of Wayne and Shuster. My favourite line? The immortal words in Canuck comedy: “I told him,’Julie, don’t go!’”

Count Sneaky said…
I like your yoke. But i'm not sure about your yolk. Perhaps,
Brutus liked his eggs Benidictine! Keep cracking them.
Count Sneaky
18 March 2009 at 22:48

Count Sneaky said…
I like your yoke. But i'm not sure about your yolk. Perhaps,
Brutus liked his eggs Benidictine! Keep cracking them.
Count Sneaky
12 May 2011 at 14:41