Who said "Ah, yes divorce...from the latin word meaning to rip out a man's genitals through his wallet"? 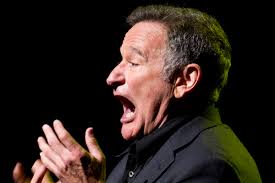 Dave and Nancy had been looking forward to this comedy show all week. Longer even, since they purchased their tickets several months ago.  They loved stand-up comedians and this Robin Williams Back From The Dead event was no exception. I mean how great could it be? Tasteless, ghoulish and Robin Williams all rolled into one.

They handed over their tickets to the man on the comedy club door and sought out a small table for two near the stage. As Nancy got settled Dave went off to get a couple of beers. He arrived back just as the light's grew dim. The two clanked their long-neck bottles, mouthed "cheers" and each took a swig.

"Do you think God gets stoned? I think so" claimed the first funnyman. "Look at a Platypus" he concluded. The line prompted a few sniggers throughout the room.

And on it went for about an hour and-a-half. Each one-liner invoking ever increasing amounts of laughter among the audience. And it seemed the more they drank the more hysterical the audience reacted to the jokes.

The last joke inspired an uproar of laughter: "I wonder what chairs think about all day? Oh, here comes another asshole."

With tears running down their cheeks and their sides splitting Dave whispered to Nancy "Do you wonder why we're all laughing so madly?

"I think it may have something to do with the beer we're drinking' squealed Nancy. Look, it's called Brouhaha.

And brouhaha/uproar was the prompt from Studio30+ this week. My apologies to an interred Mr. Williams for helping me along this week. He's probably rolling over in his grave at all these dead jokes.