I Love To Spoil Them - @Studio30Plus Writing Prompt 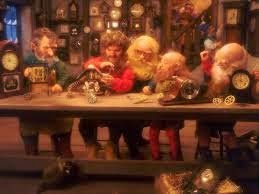 The big fella with the long white beard offered to take me on a tour. And as he spoke I noticed how his eyes twinkled and that his dimples were merry. How could I refuse. Heck, I'd surely hurt his feelings.

So we jumped into his little red golf cart and as he gave a whistle away we flew through an immensely huge factory. Man, it was bigger than Amazon! There were cobblers cobbling and little elves elving and then what to my wondering eyes should appear but seven dwarfs carrying kegs of beer.

Out of the golf cart I flew in a flash at the big guy's offer of a glass from his secret stash. And it was delicious. I got the feeling tonight was kinda special.

I watched as those little guys worked so hard at their tables assembling tons of toys for millions of girls and boys. What a sight.

The big guy patted me on the back and told me how proud he was of his little workforce - emphasis on little I guessed.

And they whistled while they worked! They were actually happy at their tasks. I thought I heard the strains of "Here Comes Santa Claus". And it was infectious because I found myself humming the song. And the big guy whistled, then shouted, and called me by name and said "So what do you think?"

Well, I was flabbergasted, naturally. "I'm simply amazed" I said. "But how on the world do you do it? How do you get these little guys to work so hard and actually enjoy it to the point they whistle while they work?"

He laid a finger aside of his nose, because it was itchy, and he gave a nod to a set of huge doors behind us.

He winked, twisted his head and opened the doors. I started to stare and then I laughed at what I saw in spite of myself. It was a large red velvety room full of tiny scantily-clad female elves. Many were smoking as they lounged on velour divans and sipped on daiquiris, Tom Collins and other fancy  alcoholic drinks.

I thought my eyes must be deceiving me.

The big guy turned with a jerk and said " I love to spoil them".

"Well, you've convinced me" I exclaimed, 'ere I melted at the sight. "When can I start!"

Tara R. said…
An elves harem?! Whodda thunk? George Carlin once said that the main reason Santa was so jolly was because he knew where all the bad girls lived.
24 September 2014 at 18:24

nonamedufus said…
Well, you know sometimes romance is in short supply.
24 September 2014 at 22:56

ReformingGeek said…
They must have a hard time concentrating.
25 September 2014 at 08:58

jannaverse said…
Depending on what they're doing, the pointy ears might make things awkward. But who am I to judge.
25 September 2014 at 21:55

Kir said…
lyrical and genius...I'm ready for Christmas. Love how you drew on "Twas the Night Before.."

nonamedufus said…
Thanks, Kir. You're always so positive about my stuff. Glad you liked this.
28 September 2014 at 15:57

jannaverse said…
That's what everybody says right before they get jabbed. (Heck of a thing to have to explain to the emergency room people.)
3 October 2014 at 17:39