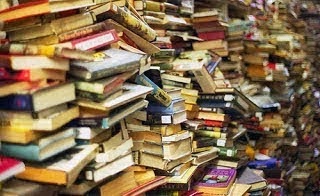 February is the shortest month of the year. In Canada, as we freeze through another Polar Vortex, it feels like the longest. And yet last month I read all of two books.

The first book took me about 25 or so days to read. I'm not slacking, really. This missive was over 4500 pages. War and Peace? No. The Complete Sherlock Holmes. Four novels and 56 short stories later you can ask me anything about Sir Arthur Conan Doyle's famous sleuth. It was a satisfying read. Each time I picked it up it was like returning to a couple of old friends…Holmes and his sidekick Watson. The stories were written between 1880 and 1914.

The other book I zipped through at the end of the month was The King In Yellow. The internet has been mad about this book recently as it forms the basis of the influences of Nic Pizzolatto, author of the hit series True Detective, a deep, dark twisted crime noir effort.

The King in Yellow was written by Robert W. Chambers in 1895. It's a collection of horror stories many of which have macabre elements and twist endings. It is said to have influenced other writers, HP Lovecraft among them. I found it to be somewhat in the style of Edgar Allan Poe. I liked it. Until now, this work has been virtually unknown. But with it's links to True Detective sales of the book have shot through the roof.

So Chambers it seems was a contemporary of Conan Doyle. And my reading both collections this month was quite serendipitous. As well, both books were free in iBooks - a definite plus. I see, however, that Amazon is now charging close to $14 for the hard cover version. Their Kindle edition is selling for just under $9.

So if we take the 8 books I read in January, I've now read 10 books this year.

Debra She Who Seeks said…
Yes, I read the Complete Sherlock Holmes a number of years ago when I was in a Sherlockian frenzy. Great stuff!
6 March 2014 at 09:15

Bryan G. said…
You are a reading rock star!


I think you probably can split the Holmes into about four books easily, if nothing else to "fluff" your totals. ;)

Cheryl said…
When I saw the King in Yellow on your sidebar I was curious about it and now I'm glad I didn't delve any further since I haven't been able to read a horror story in over 25 years. I am tempted to dive into my copy of Doyle's masterpieces though. Or maybe I'll grab Dashiell Hammett's compendium and read that one instead. After I nap.
6 March 2014 at 12:01

nonamedufus said…
Hell, the Holmes collection IS 4 books PLUS 56 short stories. Some people told me "Take a break and get back to it later." But I knew if I did that I might not ever go back. So I knuckled under and read right through.
6 March 2014 at 12:13

nonamedufus said…
Cheryl, if you haven't seen True Detective look for it to be repeated (the season finale is Sunday). It's the greatest thing that's been on the small screen in a very long time. TheKing in Yellow wash't all that scary. Just a lot of "didn't see the coming" endings is all. More or less.
6 March 2014 at 12:15

S.G. Wright said…
The Polar Vortex has just been broken, finally! What grief it brought. It seems you're the Sherlock expert now after 4,500 pages, wow. I need to see HBO's True Detective sometime. cheers. http://www.thecuecard.com/
8 March 2014 at 17:08