October 23, 2013
Hey, alright! You found me. Not like I didn't leave enough hints on Facebook and Google+. Some might have gotten tired of all that repetition but hey, that's what's known as marketing. Which reminds me I've gotta pick up some milk, bread and beer today. 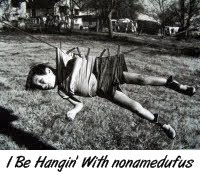 Almost a year ago - it was November 2012 - I retired Pause Ponder and Pun. Hey, there's only so many funny pictures on the internet - that aren't cats - crying out for a caption. Well, guess what? We're bringing it back! I checked and there's a whole bunch of new pictures out there just screaming for your captions.

So, same deal as before. I'll run a pic on Wednesday, you leave a comment, the winner will be posted Saturday.

I'll post the top three captions and the winner gets that dufus badge up there.

"Badges, we don't need no stinking badges," I hear you say.

Sure you do. You can post it on your blog. It's priceless. 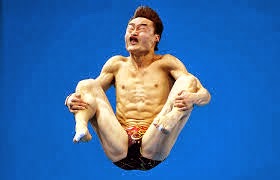 And when you're done here, spin on over to my good blogging buddy Screaming MeMe's place.  She's back in the blogging business after a bit of an hiatus and has a caption thingy going on too! As well, the lovely and charming Chelle B, who is known around these parts as the offensive...er, um, make that offended blogger, is running a caption contest as well. My God, we're taking over the internet. Drop by both their blogs. Tell 'em dufus sent you.

Agent 54 said…
If you train hard, concentrate, focus and eat at Taco Bell many times, you can gain the ability to fly using the power of your own farts.
23 October 2013 at 09:01

madmadmargo said…
Jack be nimble
Jack be quick
Jack jumped over the candlestick!
23 October 2013 at 09:21

meleahrebeccah said…
OMG! I am terrible at coming up with captions - but that photo is cracking me the hell up!
23 October 2013 at 11:32

Chelle Blögger said…
Chow Ling's first attempt at base jumping ended badly when he forgot to properly secure his parachute.
23 October 2013 at 12:23

Laughing Mom said…
That moment when Long Dong realizes that no matter how hard he pushes, that baby is just not gonna come out on its own...
23 October 2013 at 12:48

MalisaHargrove said…
After laughing at his wife's tears, Phuc Dat volunteered to demonstrate bravery during a Brazilian Wax.
23 October 2013 at 13:39

Cheryl said…
THIS is why I usually drop by, tell Dufus I like his photo, sit back and wait for the winner to be announced.
24 October 2013 at 12:45

Shawn Ohara said…
Nonamedufus takes the plunge as he relaunches Pause Punder and Pun
24 October 2013 at 18:31