June 25, 2013
If memory serves me well - not that I was around then, but the history books tell me it happened - back during the war of 1812 a bunch of silly, and incendiary-minded, whooped-up Canadians burned down the White House and the Capital Building in Washington. Hey, what did we know? 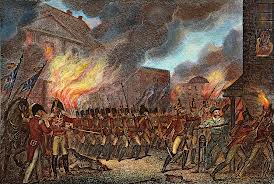 Who's up for some s'mores?

Since then the relationship between us has improved immeasurably. After all, it had nowhere to go but up.

Of course, if a bunch of nut-job Yanks were still harbouring a grudge and were up to returning the favour this would probably be the best week to do it.

Sound incredible? It could happen. Just think of rallying the members of the Westboro Baptist Church together. And I thought Canada was the per capita king of nut jobs.

How could it happen? Because many Canadians - the ones in so called lower Canada - will likely book off work this week and take advantage of yesterday's Fete National or St Jean-Baptist Day June 24th - where the majority of Quebeckers eat a lot of poutine, drink a lot of Labatt's 50 and watch a lot of fireworks - and next Monday's Canada Day July 1st - where the majority of the rest of the country imitates Quebec.

You see many Quebeckers and Canadians will enjoy one or the other or both long weekends, and perhaps the shortened work week in between as well.

They'll be off at the cottage, the lake, Toronto, (yeah, right!) the poutine bar and the brewery and such and you Americans can just sneak right in.

And these days we won't mind coming under attack. Everybody hates our government up here anyway, not to mention certain fat cats in the Senate who feel a certain entitlement to padding their expenses at the taxpayers, um, ah, expense.

And guys, leave your watery, diluted, pissy Budweiser beer at home. But bring your own fireworks. We can't afford them any more after paying out all those housing allowances to members of the Red Chamber. 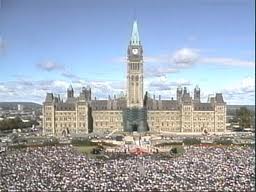 If you're looking for our Parliament Buildings, just go to Toronto and turn right.
Don't wait too long. Come July 1 you'll encounter this crowd.

Oh, and if I forget later, or am too hung over or too poutine puffy to remember, Happy July 4th!

nonamedufus said…
Puffy is being polite. After plates of fries, cheese curds and gravy one is very slow to move.
26 June 2013 at 09:10

Nora Blithe said…
"And guys, leave your watery, diluted, pissy Budweiser beer at home." Lol a favorite beer in our house is Labatts. Yeah, we can get that in America.
26 June 2013 at 11:31

nonamedufus said…
Truth be told I haven't had a 50 in years, although there was a time I drank a lot of Labatt's Blue Light. But Labatt's is no longer Canadian owned. It's part of Anheuser-Busch InBev. Guess what? They make Bud.
26 June 2013 at 15:43

Shawn Ohara said…
For St Jean I hung around with friends and avoided large gatherings. For Canada Day I am heading to Boston. So if I get wind of an imminent attack I will let you know.
26 June 2013 at 19:35

Nicky said…
I was at an open-bar wedding the night before and spent St-Jean recuperating. I may still be recuperating on Canada Day.
27 June 2013 at 22:49

Boom Boom Larew said…
So, does this mean we're all invited to bring our fireworks to your house and light up the town next week?
29 June 2013 at 07:37