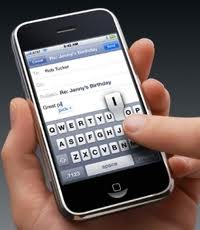 As a gentleman of a certain age I pride myself with keeping up with technology. I'm downloading music from iTunes and books from iBooks. I have an iPhone, an iPad and a MacBook. I get my news from the internet, not newspapers and TV. I watch videos. I check out movie times and theatres. And I bookmark restaurants I go to so I can reserve on the internet in the future.

But one thing I don't get is texting. I mean really, as if e-mail wasn't impersonal enough. Now you can be rude and remote in real time?

I have friends who aren't even on Facebook so like I'm sure they're not into texting. They, and I, think cell phones are for talking. How prehistoric, right? And I actually still have a landline telephone at home. Imagine!

But I hate to admit I am guilty of being lazy and evasive. That's right, I'm a texter. I use my cell phone for almost everything except talking. It's got games, books, news, music, Google and, yes, a texting function.

But my texting is limited. I contain it to just my kids. It's not because we're not close. It's because it's convenient. They both work. I know they'll get my text and answer me later in the day. And vice-versa.

But still it's difficult for me to accept. I mean I grew up in the day of rotary phones and party lines and, I know this will shock you, face-to-face conversations. Yes, imagine having to actually talk to someone standing next to you! Welcome to the 2010s!

Funny thing. In 1976, one of my favourite 70s bands released an album called "How Dare You?".  The inside of the album cover portrayed a group of people at a party, all of them talking on the phone. 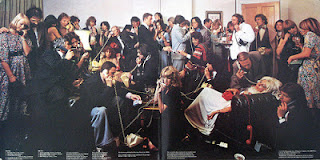 This was 1976, mind you. Cut the phone cords and that picture would represent any social gathering today. Why talk to someone in person when you can Tweet, Facebook, e-mail or text someone else?

Talk to someone face-to-face? I guess 10cc got it right, and were way ahead of their time, when they said "How Dare You?"

Check in with those characters at We Work For Cheese and see who else is texting today.

nonamedufus said…
That could be next. Choirs singing via texts! Imagine.
7 February 2013 at 08:05

Cheryl P. said…
Non-verbal communication seems to be rampant. I understand the convenience and just as you do, I use texting to send messages to family members or friends. Little messages that have no time requirement.

nonamedufus said…
My point exactly, Cheryl. Why is social media so unsocial?
7 February 2013 at 08:53

Unfinished Person said…
You've never used Skype then, have you? :) And yes, this is attack Canadians day. I just checked my calendar.
7 February 2013 at 08:54

Shawn Ohara said…
I hated that I went from calling people to emailing them. And now to texting them.
At work I tell my staff, if you can see a colleague instead of calling, do it. If you can call instead of emailing, do it.
7 February 2013 at 10:17

Cadeaux said…
I HATE texting. I love talking. I always start up conversations with people...sitting in doctors' offices, waiting in line at the grocery store, calling people up to complain about cat food, etc.

And they say the South is friendly. Bullshit...New Jersey was a LOT friendlier than this. And we're supposed to be rude.

But...I always talk to people. I've only had one person look at me like I had a third eye in the middle of my forehead. Usually they say how refreshing it is for someone to talk to them...especially older people. We remember what face-to-face talking was like.

I've even gotten my hair done and they don't say jack. Isn't that the first rule of hairdressing school? To talk to your customer?

BTW, that one's lyrics has the words "Just because...I call you up..."

Ziva said…
I might get burned at the stake here for being a horribly bad Finn, but I'm just going to come out and say this; I'm not big on texting. I text family when I know they're at work, but apart from that, I really do prefer to call. Or IM, which isn't nearly as bad as texting. :D
7 February 2013 at 11:27

nonamedufus said…
It's just so impersonal. Although sometimes I'd like to see it in reverse. Then I wouldn't have to answer the phone and speak to telemarketers and survey takes. I could just ignore their text!
7 February 2013 at 11:52

nonamedufus said…
Cadeaux, which blogger are you? Odd, though, isn't it how social media - including texting - has really changed how we socialize. You're really on your toes picking up on those 10cc lyrics. Well done!
7 February 2013 at 11:55

nonamedufus said…
Ha, ha. Yeah, really useful should you run into Alex Trebek in an airport. Just remember to phrase your answer in the form of a question, eh?
7 February 2013 at 12:17

nonamedufus said…
Ah, okay. I thought I'd narrowed it down to you but then you had a different name on your blog. Good to know how I'm talking to, Mariann. Thanks.
7 February 2013 at 12:19

P.J. said…
I am a texter. But I still would rather sit at the bar and chat with somebody over a beer rather than have a beer and text said person at the other end of the bar.
7 February 2013 at 13:45

Linda R. said…
I like texting and email because you can tell someone something without having to interrupt them when you know they're busy. They can get back to you later. If you call and don't get them you have to leave a voice mail. Man, I hate that. Then they have to call you back and you can end up in a game of phone tag, and nothing gets done. But they can read your message and respond appropriately.
7 February 2013 at 13:53

nonamedufus said…
I'd rather sit at the bar and have someone buy me a beer! Which I couldn't do if I was texting the person.
7 February 2013 at 14:20

nonamedufus said…
I see what you're saying Linda, but thus far you seem to be in the minority. Could be you're much younger than the rest of us too!
7 February 2013 at 14:21

Nora Blithe said…
To me, texting is the digital equivalent of leaving someone a Post It note. It's the bit of info I need to give them that they can pick up at their convenience. Is that really so horrible, Mr. Hypocrite Panties? :)
7 February 2013 at 14:21

mike said…
You know, texting actually bothered me alot....until I got a smart phone with a full keyboard. The keyboard is total game changer.
7 February 2013 at 17:26

nonamedufus said…
Yeah, I can see how a keyboard might help. In my case, with my iPad, I just go to "contacts" punch text and the phone number and voila, the keyboard pops up!
7 February 2013 at 18:16

Katherine Murray said…
I wonder if my kids will get to the point where they NEVER talk face to face.... texting is too easy!
7 February 2013 at 22:09

jannaverse said…
I vaguely remember face-to-face conversations happening sometime during the 70's.
I definitely remember that our phones were the old heavy rotary kind. You could kill rats with them if you had to. (Not that we ever did, although it was a long time ago and my memory is bad.)

I've never used an iPhone or an iPad or an iPod or an iPoodle (or whatever the next big thing is).


I have, however, texted.


There's still hope for me, though, because I make a point of texting with correct spelling and grammar and punctuation. So I still qualify as a weirdo who is stuck in the past.

MalisaHargrove said…
I have many family photos from the last 5 years where we are all involved with our IPhone or IPads. The only hold out in the family was my 82 year old mother. No more. She is hooked. She is now on her IPhone more than me...if that is possible.
7 February 2013 at 23:20

mikewjattoomanymornings said…
I actually miss rotary phones. There was something very gratifying about listening to that rotary phone noise and watching the little wheel with holes in it spin.
8 February 2013 at 01:04

Shawn Ohara said…
I always wanted an answering machine for my front door. In case people knocked while I was away.
8 February 2013 at 08:10

Indigo Roth said…
Hey Dufus! You sound conflicted, Sir! I remember saying maybe fiften years ago, "I can't ever imagine needing a mobile phone". Now I'm sitting here wondering how much longer it needs to charge before I can leave the house. Yay, progress. Indigo
8 February 2013 at 08:26

nonamedufus said…
I think, more importantly, they could kill cats. But that aside, our phone was on the wall in the kitchen. The day we got a second phone was a big, big day!
8 February 2013 at 09:02

nonamedufus said…
I know, eh. It also gave you time to think about what you'd talk about as the dial was spinning around.
8 February 2013 at 09:04

Quirky Loon said…
Ha! Funny. However, I am a texter too. And it's more about getting the message to them at their convenience. I don't want to be the person who they don't have time for a phone call, hence a text is less invasive.
8 February 2013 at 11:05

nonamedufus said…
Oh my, it's come to that? They won't take your phone call 'cause they're busy texting someone else!
8 February 2013 at 12:14

KZ said…
It was an odd day when my mother started to text me and my brother on a regular basis in order to coordinate family dinners. On the whole, texting might play a slight contributing factor to the downfall of etiquette and effective interpersonal communication, but you have to admit it's remarkably convenient and practical in the right situation.
9 February 2013 at 11:05

nonamedufus said…
Yes, I do agree. In many instances it has replaced face-to-face contact and using the telephone despite, or perhaps because of, it's convenience.
9 February 2013 at 11:29

Boom Boom Larew said…
Hey... when I was a kid we had a phone with a little crank on the side. Dial phones were only for the citified folks. Other than that, we're at the same place with texting... I text my kid and that's about it.
10 February 2013 at 17:27

nonamedufus said…
So you're the one that made those "crank" calls like: Is your refrigerator running? Well, you better catch it.
10 February 2013 at 17:30