February 02, 2013
Okay, I'm really gonna show my age here but for me "Hold On" makes me think of Sam and Dave, those soulful dudes from the 60s.

Forget the Blues Brothers or any other covers. There was nothing quite like the original in 1966. I caught up with Sam and Dave in 1969, at the age of 17 when I bought their "best of" collection... 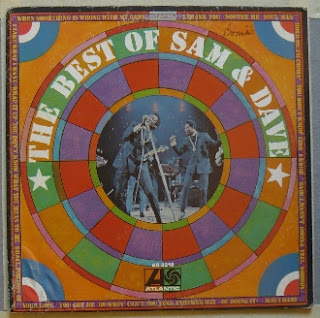 This disc had some great tracks, including: Soul Man, When Something Is Wrong With My Baby, I Thank You and, of course, Hold On, I'm Comin'.

Sam and Dave were known variously as "Double Dynamite", "The Sultans of Sweat", and the "Dynamic Duo" because of their stage performance, not unlike that of James Brown for instance.

Legend has it the inspiration for the song came when songwriter Isaac Hayes called to his partner Dave Porter - indisposed in the bathroom - who replied "Hold on man, I'm comin'". They wrote the song in 10 minutes. It became a monster R&B hit for Sam and Dave.

Head on over to Nicky and Mike's and check out the linky dinky thingy and see who else is holdin' on.

Nicky said…
I have a very similar dance style as those guys. Except less soulful. And less coordinated. And more flailing-like. But other than that...

Cheryl said…
I haven't thought about Sam and Dave in a very long time. I, too would have have been 17 in 1969. That was quite the year. I was a junior so I never went anywhere of interest. My brother left for Viet Nam that year so I think I was somewhat distracted.
2 February 2013 at 12:18

Linda R. said…
That is the first thing I thought of when I looked at the prompt, and it was my contingency plan. Love the song, plus I do like the Blues Brothers, too.
2 February 2013 at 12:32

nonamedufus said…
I thought so too. These guys epitomized what Stax Records was all about.
2 February 2013 at 12:59

Jayne said…
OMG! Great (old) minds do think alike! Who would have thought both of us would go here? I loved these guys. I didn't know the origin of the song. Thanks for the info.
2 February 2013 at 13:31

nonamedufus said…
These guys were fabulous. I don't quite remember how I discovered them in my mid-teens but I did and thought they were great. I wasn't really into the Motown sound. But these guys, though, had an edge to their music and I loved it.
2 February 2013 at 14:47

Indigo Roth said…
Hey Dufus! These guys are legends, and I'd totally forgotten about them; I'll go thrash myself with birches. But thanks, man. Roth
2 February 2013 at 15:14

nonamedufus said…
You Brits do strange things sometimes. Thrash yourself with birches? Is that like doing the mashed potato?
2 February 2013 at 16:35

Boom Boom Larew said…
Now that truly made my day! You're definitely in charge of tunes when we finally have our Monster Blogger Party.
2 February 2013 at 19:16

MikeWJ at Too Many Mornings said…
I'd never heard of these two, NoName. But I'm going to look them thanks to you
3 February 2013 at 03:01

nonamedufus said…
JUST FROM YOUR COMMENT! Oh, and I had a bowl movement yesterday.
3 February 2013 at 08:04


Thank heavens you didn't go with Richard Marx "Hold On to the NIght."

KZ said…
My first exposure to this song was through late night television. As I recall, Conan O'Brien's band used to play it a lot on his "Late Night" show on NBC. I never knew the name of the song or the artists, so thank you for putting this song in context. Amazing song, and amazing performers.
4 February 2013 at 03:07

nonamedufus said…
Oh these guys were pretty amazing. "Soul Man" was another massive hit by them.
4 February 2013 at 08:04