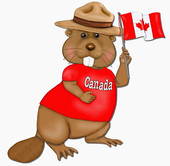 You know my homeland is a quiet little nation that basically wouldn't hurt a flea. Living next door to the land of the free and the home of the brave isn't easy for such a traditionally namby-pamby nation. But our government is doing its best to catch up, even though we can't seem to make up our minds who we want to emulate. And our government's efforts have been schizophrenic to say the least.

For example, our Prime Minister likes the idea of hanging Obama...his picture that is...in American embassies around the world. Not to be outdone, Stephen Harper ordered pictures of the Queen to be hung in all Canadian embassies. Score one for the Brits.

Meanwhile the Prime Minister likes the idea of the distinctive paint job of Air Force One. So he's ordered one of our Air Force's dull grey Airbuses at his disposal to be painted with "some bright colours". Score one for the Yanks.

Not too long ago, the Prime Minister recently restored the word "Royal" to the Canadian Air Force's moniker as well as to the Navy's. Points again to the Brits. But nobody gave a thought to the French translation of RCAF the Air Force's nom de guerre and unofficially FARC was adopted. FARC however is apparently widely known as being associated with Columbia's brutal guerilla army. Points to Columbia. (One senior defence official was heard to murmur "Well, FARC me" at the height of the controversy.)

Last summer, our Minister of Defence called up one of the force's Search and Rescue helicopters to pick him up from a fishing holiday in Newfoundland. They pulled him up in a basket and away they went. I don't know who gets the points for that. Maybe the defence minister.

There are many other examples of imperial and presidential-like activity by our government. The next example isn't either of those but it is equally difficult to explain.

A Canadian Senator has launched a move to change Canada's national symbol from the beaver to the polar bear. How can this be? Canadians love their beaver. Beavers are highly respected. It's every Canadian man's dream to conquer and tame a beaver.

But this Senator wants to replace beavers with polar bears. Polar bears!!! Think of what that might do to our nation's psyche. I guess if this movement is successful, points to the beaver-haters.

And, hey, Canadians love their beavers. They're adorable and have been our national image since who knows when. Besides, these polar bears already have a nice-paying gig. 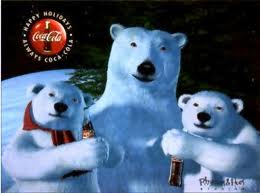 Stef Papenfuss said…
How come Harper didn't order to hang a picture of Prabhakaran in every embassy/high commission right next to the Queen's picture?
After all LTTE is Harper's biggest constituency in Canada !!!
5 December 2011 at 12:47

nonamedufus said…
I know. Who in their right mind would hate Justin Beaver THAT much?
5 December 2011 at 18:56

Stef Papenfuss said…
I don't think Harper knows any animals other than Tigers.
5 December 2011 at 19:33

Shawn said…
I'm Canadian through and through. I like me a beaver. But I think all the Canadiana symbolism was a practical joke. Beaver? Loon? Lacrosse? Leaf? Poutine? Celine Dion?
Someone has to be pulling our leg.
5 December 2011 at 20:33

nonamedufus said…
And our flag? A maple leaf! Why couldn't it be an Ottawa Senator or a Montreal Canadien.
5 December 2011 at 20:43

Deb said…
You have the beaver.
We have Obama.

quirkyloon said…
Heh heh. One correction: It's every Canadian man's dream to conquer and tame a beaver."