Have A Cold One 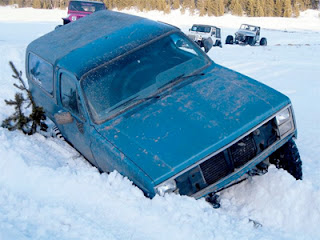 Robert Service wrote "there are strange things done 'neath the midnight sun". Well it looks like we can add Alaska's Clifton Vial to that list.

Seems Clifton crashed his truck and got stuck in a snowdrift near Nome.

But Clifton was prepared. He used a sleeping bag to keep warm and started up the truck every once and a while so he could turn on the heater all in an effort to avoid frostbite with the temperature dropping to around the -28C mark.

Unfortunately he had no food with him but he did have a knife and...wait for it...several frozen cans of Coors light.  You know, the beer that's best served chilled? Yeah, so he used his knife to cut the cans and dined on frozen beer. Seems he didn't have to wait for the mountains to turn blue to tell him the beer was cold.

Things all ended happily as Clifton's boss realized he hadn't turned up for work and sent a search party out to find him.

When his rescuers finally found him and asked him if he was okay, Clifton replied "Oh, yeth, I thertainly yam but I hass to pee sumfin' fierce." 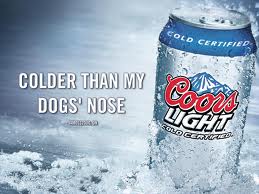 Or the brass balls on Clifton Vial

nonamedufus said…
You know there's something about this story I don't get. His boss noticed he wasn't at work so he sent out some co-workers to fin him. So the guy couldn't have been gone more than a day. I've known people that have gone longer than that without eating...or drinking. Nice try pal.
8 December 2011 at 16:16

Malisa said…
Bless his heart. I would hate to be stranded with only Coors. I might have to go thirsty...I mean hungry. Don't leave home with Miller Lite!
8 December 2011 at 18:47

nonamedufus said…
I made up the part about him having to pee...only because I wondered just how he handled that.
8 December 2011 at 21:35

nonamedufus said…
I think beer popsicles would be just great to have while watching women's beach volleyball. Ask Jepeto what he thinks.
9 December 2011 at 12:58