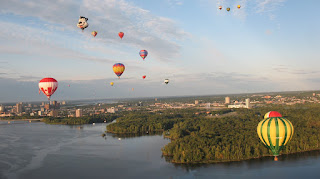 Ronald was a lucky lad. When he was four his parents perished in a hot air balloon incident at the Hattiesburg fair. Now wait, that's not the lucky part. Ronald survived the balloon blast because he was on the ground with his Aunt Flo and Uncle Joe Bob. Flo and Joe Bob had no children of their own and so took it upon themselves to raise Ronald as their own. Ronald may have been an only child but he certainly didn't suffer from a lack of love and affection.

Flo and Joe Bob showered Ronald with love and he felt warm and protected throughout his time with them, Yes, that's right, he only spent a certain amount of time with them. Then they too were gone and Ronald was alone.

It happened in the summer of 1976. Flo and Joe Bob planned a camping vacation in Canada's Algonquin Park, miles from Hattiesburg. They packed up the Subaru on a Monday morning and headed north. Ronald, in the back seat, could barely contain himself. When they arrived, the campers decided to unpack and then play a little game of hide-and-go-seek. Ronald was it. He leaned against a tree, close his eyes and counted to one hundred.

And that was the last that Ronald saw of Flo and Joe Bob. He cried their names but it was no good. It looked like he was the only surviving member of their little camping party. Bad enough some years before he had lost his mom and dad to tragedy. Now he had to refer to Joe Bob as his ext-uncle and Flo as his ext-aunt.

The prompt for Two Word Tuesday this week is extant/surviving. As ever we've had a little fun with the clues.

Paula Wooters said…
Glad I survived that one!