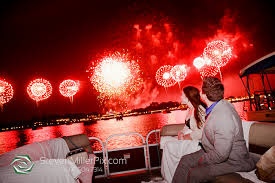 We gathered in the dark. After an evening of several libations with new friends we boarded the pontoon boat for a short trip across the lake. The only sound, apart from our conversation and laughter, and the low speed chugging of the motor, was the call of several loons.

It was our first day at the cottage and the rain had finally let up after falling for most of the day. We were lucky. The fireworks began at 10pm sharp. Mayhem would have ensued if the pyrotechnics had have been cancelled.

I'd never witnessed fireworks on the water before. They exploded noisily in the air but their reflection below was silent.

For twenty minutes the loons had company as the revellers cheered and clapped and the pontoon drivers sounded their horns. We laughed at the solar-powered boat whose horn bleated like a sheep.

The manly toots of the rest of the boats responded to its call. Or perhaps derided it. The loons were silent.


This week's prompt from Tara at Two Word Tuesday is fireworks/mayhem.  I hope everyone partied safely over Canada Day and July 4th.

nonamedufus said…
These were delightful. Not a big public thing but an intimate display of mayhem.
5 July 2017 at 12:13