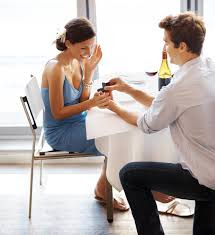 It was noon. The sun shone brightly in the sky. Birds chirped merrily in the trees. The sounds of traffic drifted up from the street. George picked up his keys and headed for the apartment door. This was a special day. Perhaps the most special day of his life to date. Today was the day he would ask Georgina to marry him. Georgina was his girlfriend. French. From France.

He grabbed everything, locked the apartment door and descended the stairs. The restaurant was nearby so he decided to walk. As he waited on the corner for the light to change he thought of spending the rest of his life with Georgina. Not that he was being presumptuous but he had a good sense she felt the same way too. He was sure it was kismet. And besides with names like George and Georgina? It was meant to be.

He stepped off the curb and into the path of a speeding bicyclist. He was thrown to the roadway, unconscious. Somebody called an ambulance. When he came to in the hospital Georgina was at his side. She looked very worried. He knew he wouldn't get another chance soon so, foregoing the knee pads, he sat up as far as he could in the bed and asked her right there "Will you marry me?" Georgina threw her arms around his neck and smothered him with kisses. "Oui oui " she whispered into his ear.

"Careful" said George. "I sustained an amalgam of injuries. I hurt everywhere" "Ah, oui" said Georgina "but not just a mal gam. You've got a mal foot, a mal hip, a mal back. How you English say a real mixture of injuries, no?"

"Yes, you're right, dear" said George. George was a pretty smart guy. He wasn't even married yet and already he was agreeing with his wife.

nonamedufus said…
Cheryl: At least it's just one injury and not an amalgam.

Cheryl said…
John, I did the unthinkable and hit the button to be informed of replies and got every comment sent to my email account. Yes, this is exactly why I installed Disqus too. Somewhere along the way, my Blogger comment tool got busted so when Disqus broke, my blog was a mess.
7 April 2017 at 08:56