That's My Name Don't Wear It Out 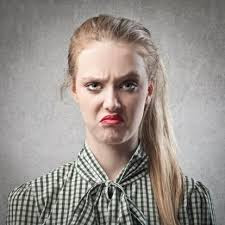 As a baby she was colicky. She cried for hours on end. The middle of the night. The middle of the day. It didn't matter. She always, always cried. She was a very unpleasant baby. And so her mother named her Shirley but often called her by her apropos nickname, Surly.

And surly she was. She had few manners. Rarely said please and thank-you. Had a habit of talking back.

By the time she started school she was no better. She was a handful for the teachers. She made few friends. She rarely paid attention. And when her mother asked her what she learned at school on any given day, she barked "nothing". And that was that.

So Surly was surly right into her high school years. But one day she met a boy. She saw him on the other side of the cafeteria. He was handsome. Unlike Surly he was surrounded by other students and they were all chatting and laughing, social skills Surly didn't possess. Then he walked by. Their eyes met. He said hi. Surly said the first thing that came to her mind "What's it to you?"

The boy's eyes widened and he said "Well, that was surly." To which she replied "Hey, how did you know my name?"

The prompt from Two Word Tuesday was surly/unpleasant this week. And stop calling me surly.