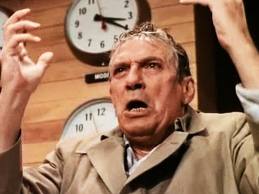 You know, I think I'm quickly becoming a grumpy old man. My wife says so. I've reached the point where, just to warn her in a conversation I preface my outburst with "I'm gonna go to grumpy old man mode here..." and then let fly.

I confess it's an affliction. I was never like this in my younger days. But now? Now I've got a word or two about almost anything. And don't get me started on today's so-called popular music or Quebec political party leaders. But what am I talking about?

Like when you're driving down the street and the car in front of you abruptly turns, no signal, no warning. So I shout to my vacant vehicle interior "Hey, there's a little stick on your driving shaft. It's called a bloody blinker. I'm dying here!"

Same when some joker in a fancy car parks himself in the passing lane going 5-10 miles an hour under the speed limit. "Hey, move outta the passing lane where, you know, people are supposed to go fast. I'm dying here!"

Now it wasn't enough that You Tube placed ads in front of videos that there's nothing you can do but watch. But now when you get to your video, there's a banner ad at the bottom that you have to click to remove (Everybody, with me...) "Hey, I'm dying here!"

Speaking of those banner ads, TV has suddenly latched onto them and you can't click them away. They pop up over credits, during shows and across sub-titles. Christ (say it with me now) "I'm dying here!"

And another thing, I don't know about the States but Canada has evolved to a twelve month a year election campaign period even though no election has been called. I'm sick and tired of the slew of negative ads all parties have come to broadcast, let alone the ones the sitting government pushes to promote itself. It's like I'm supposed to be so thankful to "the motherland" or something. "Man, (it's okay, I'll take this one) I'm dying here!"

But it's not all bad. My charming wife - who used to think the lyrics to Take Me Home by John Denver were "West Virginia, honky momma, take me home country roads" came up with a new one today when she told me she always thought Neil Young was singing "keep on rocking on the freeway."

Ha, ha, I was dying, here. But thankfully in a good way.

Sneak on over to Studio30+ for a peek at how others covered this week's prompt of moribund/dying.

Paula Larew Wooters said…
Nothing like a few Maryseisms to prevent your early demise!
13 June 2015 at 19:50

ReformingGeek said…
You're killing me, John.