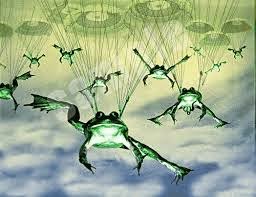 It was late July and Bob and Ray were forced to amuse themselves indoors because of yet another heavy rainstorm.

"The rain is falling down in buckets" said Bob. "Buckets?" said Ray. "I don't see any buckets. Why in hell do people say that. There's no buckets. It's like how people say it's raining cats and dogs. There are no cats or dogs in rain." "I'm not so sure" said Bob. "I once stepped in one hell of a poodle!" And they both snickered as Bob passed Ray the bowl of cheese doodles.

"Why do we say those things during a heavy rain" asked Ray. "You think those are bad" commented Bob. "In Argentina they say 'It's raining dung head-frost'" "That's pretty shitty"said Ray.

"And in Denmark that say 'It's raining cobbler boys'" said Bob to which Ray replied "Eyelet that one pass."

"Okay" said Bob "Moving right along to France, they often exclaim 'It's rainy like a pissing cow.'" "Oh, man" said Ray "I cud n't go out in that."

"Ha, well in Finland, according to my good friend Ziva" continued Bob "it's not unusual to hear someone say 'It's raining as from Esteri's ass'". "God, that blows" replied Ray.

Ray popped another cheese doodle into his mouth, swallowed and then said to Bob "Say, how come it's rained so much this year. I don't remember it having rained this much in a long time".

"Well" said Bob as he elbowed Bob in the ribs and raised his eyebrows knowingly "summer like that and summer not."

Kir said…
You NEVER fail to make me giggle and I love when you write like this. (I'm imagining the Google Search you did for this piece and I can almost hear the chuckles)

Paula Larew Wooters said…
I sincerely hope it doesn't rain cow piss when we come visit. That would definitely dampen the mood of #Lostmyliverpalooza.
3 August 2014 at 09:19