It All Began To Fall Apart - @Studio30Plus Writing Prompt 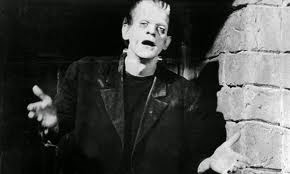 Dr. Notverynice was quite pleased with himself. After three months of working day and night he was finally putting the finishing touches to his Whambam monster.

He'd used the finest parts, not always easily attainable but necessary, in order to build a top-notch destructive machine. His plans for world domination were falling into place. The creature was the missing link. He laughed to himself at his little joke.

He sat back and imagined Whambam being let loose to run amuck (not the get stuck in kind) among the streets of Pleasantown with citizens screaming in fear and attempting to escape the clutches of Whambam.

Dr. Notverynice had planned very carefully and his constructive efforts had been meticulous, right down to the three hundred mile extension cord need to power Whambam.

He plugged in the cord that would bring the menacing giant to life. The creature stirred. Its eyes slid open. It's arms quivered while its legs rattled.

Dr. Notverynice was thrilled. And with tears in his eyes screamed at his invention "Welcome to our world, my boy. Have I got plans for you."

Whambam sat up, turned and slipped off the table to stand upon the floor. He took three steps forward and slammed into the wall. He stepped back, turned, walked across the room only to slam into the other wall.

And that's when it all began to fall apart.

You see, in his haste to dominate the world with Whambam he had neglected to give the mechanical monster any optical equipment. The creature was blind as a bat.

Evidently, neither did Whambam.

Kir said…
LOL! Oh I loved this because tongue in cheek is right up my alley.

nonamedufus said…
Yeah, I skirted very close to the central characters in that movie. I love this clip...

Stacy Overby said…
I love it. The whole kitsch superhero/bad guy feel to the writing was a perfect touch. I want to know what happens - particularly to poor Whambam.
20 July 2014 at 22:51