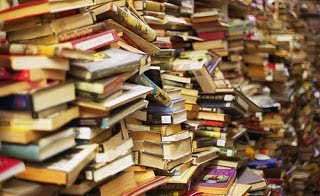 Well, here we are in early November and time to take stock of last month's reading.  Let's see, we were at 85 books at the end of September. Add 7 more in October and that's, um, carry the four and…oh, yeah, 92 books this year with 2 months to go. Safe to say I'll likely pass 100. A far cry from the 30 I projected at the outset of the year.

I started out the month with Stephen King's latest, actually a sequel to The Shining, called Doctor Sleep. Typical King "edge of your seat" kind of novel. It doesn't quite compare to The Shining but I still loved it.

I read a couple of musical autobiographies. The first by the late Levon Helm. The second by Graham Nash. Fans of The Band and Crosby, Stills & Nash will enjoy these. I did. And of course my CD collection grew as I read each one.

I also read the first two books in the There Goes The Galaxy trilogy by blogging body Jenn Thorson. If you like science-fiction with a humouristic twist then these are for you. In spots I laughed out loud. Which is okay because I'm usually alone when I read during the daytime.

I have to mention an interesting book called The Girl by "the girl" at the centre of the Roman Polanski rape case. It was a fascinating read.

And I closed out the month with another sequel. This called Sycamore Row by John Grisham which follows up on the main character from 1989's A Time To Kill. Excellent read. Grisham for me is one of those "go to" authors that never disappoint. Like King, Lehane, Follett, Rankin, Archer and several others who's next book I always anticipate.

A fairly eclectic collection, to be sure. What are you reading these days? Any recommendations?

Screaming Me-Me said…
I often say, I just don't have time for reading. Which isn't true, I read all the time --non-fiction. Your list here gives me some great ideas for getting back to fiction. Thanks!
5 November 2013 at 07:30

nonamedufus said…
The majority of what I sad this month were recent releases. I've got to get back to my detective novels by Crais, Mankell and R.J. Ellory.
5 November 2013 at 08:01

Nora Blithe said…
Hey! I know Jenn Thorson! Have you read the Song of Ice and Fire series by George RR Martin? Blew my mind. I can't think about reading (or writing for that matter) in the same way.
6 November 2013 at 07:00

nonamedufus said…
I've read all 5 books. I loved the series. I enjoyed it so much I stayed away from the TV series because I was sure it couldn't live up to the books. Then I was convinced to watch the first season on DVD and was blown away by the acting, the production values and how close they actually stuck to the books.
6 November 2013 at 07:55

Bryan G. said…
So it looks like part of the month was sequels: Doctor Sleep and A Time To Kill, which that one I didn't know had a sequel to it until I read this post. You're lapping me on the number of books read this year. I'll be lucky if I get to my goal of 75. I've hit a lull lately, but hope to pick it back up at Thanksgiving.
17 November 2013 at 10:39

nonamedufus said…
Both "sequels" were excellent reads. But I guess I'd call them both "next in the series" as opposed to sequels, even though they've been promoted as such.
17 November 2013 at 11:05