Did His Mother Tell Him "Don't Flay With Your Food"?

August 20, 2013
As I sat down to lunch yesterday I flipped on the TV to watch while I sipped on the pea soup I had prepared. I landed on the Food Network and saw that Chopped, one of my favourite shows, was set to start in about 25 minutes.

So, innately lazy that I am, I left it on the Food Network, as I couldn't work up the energy to change the channel. and started on my soup. Well, fill my pants  with hot coals, I'm now an expert in barbecuing salmon, making a sausage and veggie salad and turning the salmon into a pizza.

The show was called Bobby Flay's Barbecuing Addiction and for half an hour I sat entranced, letting my soup go cold. 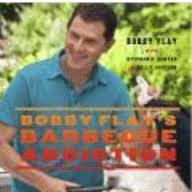 Flay is a celebrity chef and author, notable for his stint on the show Iron Chef and his numerous self-hosted shows on the Food Network.

This guy - by the way Bobby Filet would have been a better name for a chef, don't you think? - prepared and smoked the salmon, barbecued lamb sausages and prepared his own flour for a pizza crust and then barbecued that, too. Well, of course. After all, from the title of his show we know he's addicted.

This stuff looked good enough to eat, believe me. And I mournfully gazed from the TV to my quickly chilling pea soup which about now might pass as vichyssoise - a very bad vichyssoise - before me.

Chef Filet taped his show in what appeared to be his backyard. He had a collection of various BBQs and smokers - and he utilized them all.

You know, after all was said and done I wasn't sure how that pizza dough would turn out but Mr. Filet managed to rise to the occasion.

nonamedufus said…
I once cooked a frozen pizza on the BBQ. It was actually quite good. Flay cooked the sausage and different coloured tomatoes on the BBQ in this episode.
20 August 2013 at 10:18

nonamedufus said…
I can't get enough of this stuff. But then I'm spoiled. My wife is a fabulous cook. It's like being a Chopped judge every night. When we go out to friends for dinner we also comment on the presentation and taste. They wonder what the hell we're talking about.
20 August 2013 at 10:20

nonamedufus said…
There's something about the name Flay and the term BBQing that when put together conjure up an image I'm not very comfortable with. Almost sounds like something out of Games of Thrones.
26 August 2013 at 16:48