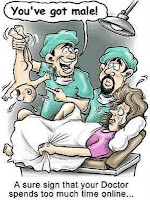 A woman burst out of the examining room screaming after her young physician tells her she is pregnant. The director of the clinic stopped her and asked what the problem was. After she tells him what happened, the doctors had her sit down and relax in another room and he marched down the hallway where the woman’s physician was and demanded, “What is wrong with you? Mrs. Miller is 60 years old, has six grown children and nine grandchildren, and you told her she was pregnant?” The young physician continued to write his notes and without looking up at his superior, asked, “Does she still have the hiccups?”