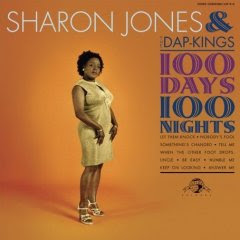 Though released in October 2007, I've only just purchased 100 Days, 100 Nights. What a great CD! This is my first excellent find of the new year. If you like Amy Winehouse, you'll love Sharon Jones. The Dap Kings are the same backing band. Sharon is a female James Brown and Otis Redding rolled into one. Below is:
1) a review from Amazon.com
2) the video for the title song
3) the Dap Kings' My Space web address

From Amazon.com
In the new millennium, soul has become big business again. But despite succulent re-issues from labels like Astralwerks and Light in the Attic, the resurgence of seasoned soul sisters like Bettye LaVette, and the volcanic popularity of new-soul crooners like Amy Winehouse, the champions of the new generation's purist strain are Sharon Jones & the Dap Kings. After the often upbeat, always exciting sounds of 2005's Naturally, the band's next outing comes off as a slightly more tempered affair. The title track opens with an indefatigable statement of purpose, dropping into a late-stage, sub-halftime groove so Jones can fully "take [her] time" lamenting her missing man. Elsewhere, her voice effortless treads the heights and depths of its range with timeless aplomb ("Be Easy," "When the Other Foot Drops, Uncle," "Answer Me"). The Dap Kings themselves have reached a pocket-digging near-perfection, recent collaborations with Kanye West, Lily Allen, and the aforementioned Winehouse, yielding the sounds of a band at the top of its game. At times, these tracks court the uninspired flavor of the wholly derivative, but in all, 100 Days, 100 Nights makes for a very welcome addition to any avid listener's contemporary soul music library. --Jason Kirk


Album Description
Although singer Sharon Jones first began attracting attention during the late '90s, her smoky, soulful voice and blistering grooves harked back three decades earlier to the heyday of funk, evoking the music of James Brown protégés like Marva Whitney and Lynn Collins with uncanny precision; not surprising, given that the veteran Jones was well into her 40s by the time she began earning wide recognition. On their own independent Daptone label, the band has sold over 50,000 copies of their first two records (not to mention over 20K vinyl 7’s) without any major label support or promotion. The Dap-Kings have been highly sought after, working with artist such as Amy Winehouse, Kanye West, Mark Ronson, Hank Schocklee, Kenny Dope, Lilly Allen, and Rhymefest.