Imitation - The Highest Form of Flattery 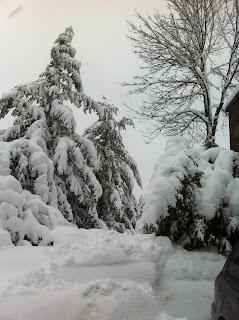 The highest form of flattery.

That's what they say, thought Brad. So I guess I shouldn't be too upset. But still, he wondered, why were there so many copycats out there.

When he created his masterpiece he thought it was one of a kind. Something to be admired for its shape and form; its smooth lines and vibrant colours in its scarf and hat.

But no, there were many imitations and as he passed each (see what I did there?) he became more and more dejected. The more copies the more his creation was devalued.

There was only one thing to do. He'd have to create something new, something different. He looked around at the imitations. They really presented a palpable pastiche across the landscape.

Yep. His snowman might have been the first but it certainly wasn't the last. He set to work to create a snow woman. Of course, he knew, it would only be a matter of time before someone else came along and passed on the highest form of flattery.

The Studio30+ writing prompt this week is pastiche/imitation. Click on the link to see the other imitators.