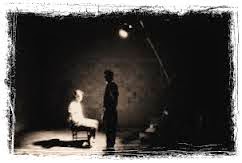 He wasn't an easy guy to track down. He was good at getting away, blending in, hiding. Like that time in 97 after the Bank of America heist. His accomplices were easy enough to find, one ofter the other. But the leader had easily slipped the flailing reach of the long arm of the law. Without a trace. It was like he had just evaporated, like he...well, you get the idea.

Thus it was a day for celebration in Precinct 79 when Captain Morganstern triumphantly paraded him from the squad car, through the Division and into Interview Room 5. Detectives and and beat cops alike knew the story. They'd heard about the elusive reprobate for years. He was almost an urban legend in the cop shop. And yet here he was in the flesh on the other end of Captain Morgenstern's handcuffs.

The interview took hours. Cigarette smoke, and the stench of stale coffee and body sweat seeped beneath the locked door. By the time all was said and done the sun had long since sunk low in the western sky. Morgenstern buzzed Commissioner Black to let him know the session had come to an end and the Commissioner said he'd be right down. He wanted to congratulate him in person.

But when Black arrived at Room 5 Morgenstern was alone with no sign of the inveterate criminal. The Commissioner's face said it all. He didn't even have to ask because Morgenstern knew exactly what he was thinking.

"We couldn't hold him" said Morgenstern, sheepishly. "It's not like he'd confessed everything."