Or this little guy?

At this time of year you probably think of the little ball of fur. But any other time, I'm sure it's the movie, starring Bill Murray that comes to mind. And that's fine. I'm with you. After all, the damn little rodent is a poseur. Yep, that's right, everybody thinks he knows what he's doing but it turns out he's wrong more than he's right. Here's what the day is all about... 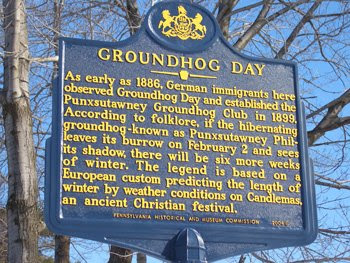 But a Canadian study (leave it to those Canucks) conducted over 30 to 40 years showed that for nearly two-thirds of those years the groundhogs' forecasts turned out to be wrong. That's right, either they were contrary to what they should have been, or winter dragged on its normal duration. Groundhogs across the nation had a dismal record of being right about 37% of the time. For shame. No wonder they've been the subject of ridicule. 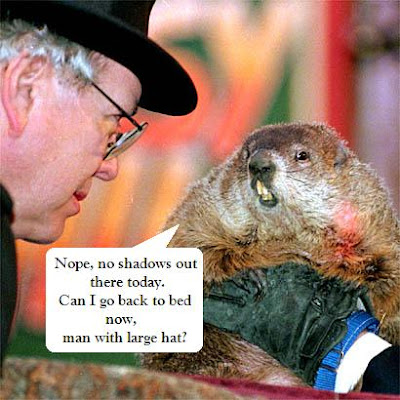 And look at the names they've been given. Ohio's Buckeye Chuck. Georgia's General Beauregard Lee. Alabama's Smith Lake Jake. New York's Staten Island Chuck. North Carolina's Sir Walter Wally. And of course the most well known: Punxsutawney Phil. Silly, Silly. But Canada is not without shame. We have our share of weird wolly woodchucks: Balzac Billy from Alberta. Shubenacadie Sam of Nova Scotia. And, of course, our answer to Phil, Wiarton Willy, just outside our nation's capital, Ottawa.
Given their woeful record of prognostication, being held up to riducule and their alliterated assinine monikers, my money's on another Phil - Phil Connors. Now, that man was accurate!

Anonymous said…
My money's on Phil Connors too...ooh, that reminds me of our annual tradition, watching the movie on Groundhog Day!
2 February 2009 at 17:50

Marvel Goose said…
You know, every year is getting to be the same, including this movie I watch on Candlemas. Is that a mass of candles or what?
2 February 2009 at 22:43

Anonymous said…
My favorite groundhogs are Punxsutawney Phil, and adorable " Smith Lake Jake". And I like the white groundhog too.
19 February 2009 at 13:53

Anonymous said…
I have to say that my favorite groundhog is Alabama's "Smith Lake Jake". He smiles and he wears a hat. I SAW HIM ON A CAR COMMERCIAL.
3 March 2009 at 14:20

unfinishedrambler said…
My money's on Phil Connors too...ooh, that reminds me of our annual tradition, watching the movie on Groundhog Day!
12 May 2011 at 14:51