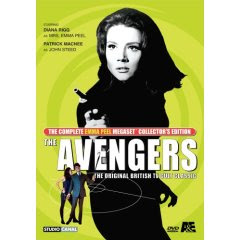 This week I finally finished the 17 disc opus: "The Avengers - The Complete Emma Peel Megaset Collector's Edition". What a hoot - and a classic 60s British TV series. It's a little lighter fare than one of my other favourite Brit series, The Prisoner, but no less enjoyable.

Amazon.com describes the set as follows:

Along with Monty Python's Flying Circus, The Avengers practically defined British cult television, and it was never better than during the three years that Diana Rigg's Emma Peel character tossed out her witty barbs and karate kicks. The supercool 2006 edition of The Complete Emma Peel Megaset encompasses all 51 episodes from 1965-66 (in black and white) and 1967 (in color) plus a new bonus disc, all in 17 space-saving Thinpaks. Paired with Patrick Macnee as the dapper, umbrella-wielding John Steed, Rigg's Mrs. Peel turned heads with her sexy outfits, then broke skulls of the various would-be world-dominating bad guys who crossed her path.

Like the mixed crime-fighting teams who came after them in shows like Moonlighting and The X-Files, Steed and Mrs. Peel had a constant platonic playfulness. In one episode when Mrs. Peel is working undercover at a department store, Steed drops in for a visit, remarking, "They told me 'Mrs. Peel is in Ladies Underwear.' I rattled up the stairs three at a time." However, unlike their spiritual successors, Steed and Mrs. Peel never jumped the shark; instead she bid a fond farewell as she passed the torch to Steed's next partner, Tara King (Linda Thorson), just as she had been passed the torch from Honor Blackman. (Blackman left her Kathy Gale character to go on to fame as Pussy Galore in Goldfinger--in one episode, Steed receives a postcard from Gale sent from Fort Knox.) But although Macnee had some enjoyable moments with other partners throughout the series' run, it's the Emma Peel years that fans remember most fondly, not only for the great chemistry between the lead actors, but the superb writing and distinctly British, and distinctly '60s, quirky charm.

Everything you ever wanted to know about The Avengers can be found at: http://theavengers.tv/forever/