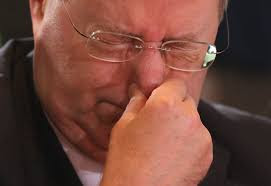 I remember in high school some buddies and I took our lunches across the street from the school grounds so that we could all smoke while we ate our lunch.

One thing led to another and we started telling jokes and acting silly until one of us, Pete Nolan as I recall, laughed so hard he blew his chocolate milk out of his nose.

Well, that was it. The rest of us, mouths empty of such liquid, laughed our heads off as we rolled around on the ground. Back then we didn't have the pretend ROTFL, let alone computers, hand-held phones and the like. Nope. We had the real thing. And we put it to good use that day.

Later on in life I experienced the real thing blowing such things as milk, juice and Coke out one or both nostrils. Messy stuff that. Now that I'm older I don't blow stuff out my nose anymore.  I'm too old for that. And I guess I don't find things as funny as I once did.

I think the last thing I blew out my nose was beer. Everything seems funnier with beer.

But you know what? I never did blow V-8. Am I starting to prattle?

Well the prompt from the folks at Studio30+ was bloviate/prattle this week which, come to think of it, I pretty much do every week so the prompt was a natural for me. See what the rest of the folks came up with by clicking on the link.