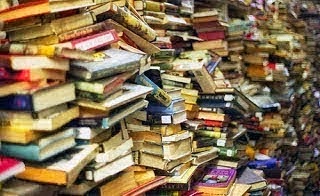 It's been a nasty, cold and rainy April here in the Ottawa region. Plenty of time for reading this month as my total of 11 books will attest.

My reading tastes are somewhat eclectic. I started the month with a look at one of my favourite musical groups, Little Feat, by Ben Fong Torres. It held my interest. I also came across But Enough About Me by Jancee Dunn, a former Rolling Stone Writer which was part memoir, part biography and totally hilarious. She interviewed famous groups and stars and yet remained totally grounded and true to her family.

I also completed Derek Raymond's so-called The Factory series, reading the last three this month. Raymond has been called a founder of British noir. This collection of books featuring a nameless cop who works out of The Factory can be gruesome and gross but also engrossing. I truly enjoyed them.

Perhaps the book that made me think the most was Thomas King's The Inconvenient Indian. King, a Native activist and novelist, takes us on a trip through the history of Indian policy in North America - Canada and the United States. In simple and direct language he sums up the evolving relationship. Guess what? The white guys suck at every turn. King isn't preachy. In fact he can be quite funny. But I tell you, I worked at Indian Affairs for the Government of Canada for close to 20 years and this book really makes me think twice about what I did for a living in the department's Communications Branch.

Finally, I came across David Wong through a comment  Michael Wolfe (LOBO) left last week. What a ride. Michael mentioned Wong's first book, John Dies At The End, and then I discovered there was a sequel called This Book Is Full Of Spiders. So I read them both. Turns out David and his friend John are among the very few who can see monsters in their community and are the only ones who know how to deal with them. File these under horror/humour. And when you're finished reading either one you can't figure out if Wong was on drugs when he wrote it or if you were on drugs when you read it. Personally I loved these stories. Thanks for the recommendation, Michael.

Here's this month's total list. I'm now up to 33 books this year.

How about you? What have you been reading?

To be honest, I still haven't finished either one ... the job I started two years ago is insane -60 hours a week, and rare, random days off. But "David Wong" is frequently podcasting -a medium I can follow at work- and that name is actually the nom de plume of Cracked.com's head editor Jason Pargin.

nonamedufus said…
I loved them. You should read them right through. I think they'd appeal to how your mind works.
6 May 2014 at 17:37

nonamedufus said…
You think I have too much time on my hands? They say idle hands are the devil's workshop but I'm really not into carpentry.
8 May 2014 at 14:59

nonamedufus said…
I keep coming across some great books be they fiction or non-fiction, biography or what have you. i managed three noir novels from Derek Raymond this month too. I still have a bunch of hard-boiled detective pieces ready to go as well. I have to get back to such authors as Nesbo, Mankell, Crais, Lehane and I started a detective series by Louise Penny I want to continue. So many books, so little time.
13 May 2014 at 11:53