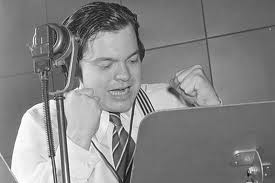 You've just finished dinner, cleared the table and helped mom do the dishes. The pots and pans are left for later because the clock in the kitchen indicates it's time for the family's favourite CBS radio program.

Dad switches the radio on, tunes in the station, and everyone sits back in anticipation of what's to come.

But as the show begins it is interrupted by a news bulletin. Are your ears playing tricks? The newscaster is trying to maintain his composure as he relays developments associated with alien spaceships hovering over the Earth. This can't be. But they're interviewing eye-witnesses. Wait, a spaceship has landed. My God a heat ray as incinerated the nearby crowd.

Well, it really did happen. The radio broadcast, that is, not the alien invasion. It was a radio play performed by the Mercury Theatre Players, produced and narrated by Orson Welles, based on the science-fiction tale War of the Worlds by H.G. Wells. 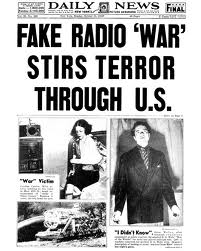 Talk of your practical jokes, this was the ultimate.

The radio play was so believable many listeners actually thought Martians were invading earth. Only at the very end of the broadcast did Wells break character and advise listeners that their performance had been a Halloween concoction the equivalent of, as he put it, "dressing up in a sheet, jumping out of a bush and saying boo."

Sure, and he had half the northeastern United States and parts of Canada in an uproar. Some people fled their homes in panic.

When I think of Fact or Fiction this is what I think of because listeners at the time really had no idea.

The latest movie treatment of War of the Worlds - the one with Tom Cruise - was pretty good, despite Tom Cruise. But as the following trailer from the first version in 1953 indicates it was - in a tribute to Nicky and Mike - pretty cheesy.


Warp on over to We Work for Wells and see how the rest of our alien friends handled the prompt today. I don't think there's any cause for panic.

nonamedufus said…
Pretty funny when we read about this now but it certainly wasn't very funny back then. Pretty scary, actually.
25 February 2013 at 12:35

Linda R. said…
That was scary then, but imagine how something like would be received today considering it could spread around the world in a matter of minutes. Even scarier.
25 February 2013 at 13:13

Nonamedufus said…
Oh yeah, with today's technology the sare factor would be awesome. I had the soundtrack of this on vying when I was a kid. It was awesome.
25 February 2013 at 13:18

mikewjattoomanymornings said…
Best. Practical. Joke. Ever. People actually committed suicide over that one. Doesn't get any better than that.
25 February 2013 at 16:53

nonamedufus said…
Really, I don't think I knew that. I loved listening to this years after the fact. Orson Welles voice alone was something to be in awe of. This was years before Citizen Kane. One talented dude.
25 February 2013 at 17:18

Cheryl P. said…
I can see where people panicked. Just think if some "news break" told us today there was an invasion. ...would it be any different??? The hint that it might of been a hoax was the fact it was on Halloween night.
25 February 2013 at 17:44

nonamedufus said…
Oh yeah, with today's technology the scare factor would be amazing. I had the soundtrack of this on vinyl when I was a kid. It was awesome.
25 February 2013 at 18:09

Laughing Mom said…
I've always thought that this was pure brilliance...I can see you thinking of something like this!
25 February 2013 at 18:33

nonamedufus said…
Oh I simply loved this. If only I were alive when Welles pulled this off.
25 February 2013 at 19:03

nonamedufus said…
The original movie is classic, indeed. Seen today, though, using special effects from the 50s the movie is somewhat laughable. I mean it was made 60 years ago.
25 February 2013 at 19:05

MalisaHargrove said…
If Orson Welles pulled that prank today, he would be fighting lawsuits the rest of his life. He might even be sitting in jail next to Jodi Arias. Now, she is good at making up fiction!
25 February 2013 at 19:54

babs (beetle) said…
I remember the Orson Wells practical joke - a lot later, of course. They broadcast it here and we thoroughly enjoyed it. Knowing it was a hoax, we could ;)
25 February 2013 at 19:59

Nicky said…
A few years back, there was actually a "reality" show that tried something similar. They got some people out in the desert at night and then staged an alien invasion. I don't think it ever aired because one of the people they pranked ended up having a heart attack.
25 February 2013 at 20:27


The original "War of the Worlds" was so much better than the Tom Cruise version if you ask me. No comparison...just like the remake of "The Day the Earth Stood Still" - no comparison. None. None None None.
25 February 2013 at 21:25

mike said…
I enjoyed the Cruise War of the Worlds alot. Actually very creepy. The original of course is a classic and great, especially when put into context with the era.
25 February 2013 at 23:06

Katherine Murray said…
This is an amazing take on Fact or Fiction. How did you even think of this.... you totally rocked it!
25 February 2013 at 23:16

nonamedufus said…
I had to Google Arias. Having done that I think they might be able to give each other tips. But I think Welles was far more entertaining.
26 February 2013 at 04:41

nonamedufus said…
I completely missed that. I wonder if the producers were found criminally negligible for the guy's heart attack. Yikes.
26 February 2013 at 04:44

nonamedufus said…
Yeah, and what about Invasion of the Body Snatchers. I loved the original. I was too young when it came out in 1956 but I remember watching it on late night TV when I was a kid.
26 February 2013 at 04:47

nonamedufus said…
I was quite surprised by the Cruise version. Lots of nail biting action. Of course with Spielberg at the helm...
26 February 2013 at 04:49

KZ said…
I remember listening to a recording of the original "War of the Worlds" radio play in its entirety. The first half was in the style of a live news broadcast, but the second half was narration from somebody who witnessed the aftermath of the attacks. The second half was narrated in the past tense, and was very clearly radio theater. All people had to do was stay tuned a little longer, and they would have realized it was all a show.
26 February 2013 at 05:15

nonamedufus said…
It may have been clearly radio theatre to you but it sure wasn't to thousands of listeners.
26 February 2013 at 05:30

KZ said…
I laugh at them with the smug confidence that comes with historical hindsight!

meleahrebeccah said…
While I wasn't alive when this happened, my grandfather Poppa Sye told me all about this story. And you're right, "Talk of your practical jokes, this was the ultimate." - INDEED!
26 February 2013 at 14:32