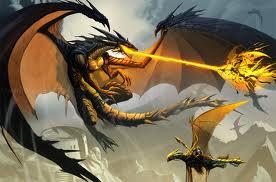 On the highest branch of a barren tree, high upon a rock-strewn mountain I sat taking in the view below. I had retreated to my perilous perch after having waged a weary battle with the inhabitants of the village below. Many of their bodies now lay strewn throughout the muddy streets where, not more than twenty minutes ago their blood curdling screams filled the air in an attempt to first frighten, then, slay me. But their efforts were all for naught. And now their bodies and abodes lay smouldering, smoke wafting gently in the soft blowing breeze.

I don't know for certain what possessed them to turn as they did upon me. I was only seeking sustenance after my long and laborious flight from a similar village many miles away. And in that village, as with countless cities and towns before it, their townspeople turned in tyrannous fashion against me.

It wasn't always like this. Many moons ago the humans that walked upon the earth worshiped me, my large leathery body, my wondrous and majestic magenta wings, my gravity defying deftness and of all things my burning breath.

However, one day as I soared in a circular fashion in the bight blue and cloudless sky voices from below and above called to me.

The sound was relentless and hasty insults were hurled at me that carried capriciously in the wistful wind. The words were hurtful; they stung me like nothing before. And they made fun of my faceless visage.

Let me tell you, if you'd blown fire every day for forty years your face would be a little worse for wear too.

And I'd blown some serious fire over the years. Not merely smoke like some precocious pretenders have done that some may have read about over the last twenty-three days.

Often times I've had to fight with flames to defend myself against large winged creatures hell bent on poking out my eyes. Charred cheeks is the price one pays for a dragon defending itself.

And it was an accident that I set that village on fire many, many years ago while I was toasting a flock of pheasants who had come after me with their eyes on the prize, their talons attempting to tear out my  pupils.

Alas, now my reputation precedes me everywhere I go. I was only protecting my eyes from those blasted birds in that fateful fight. Maybe things would have been different had I worn protective eyewear.

Instead, though, I made a spectacle of myself.

And if you think this tale is absurd wait until you get a whiff of the rest of the stories accessible via We Work For Dragons. My apologies to MikeWJ who, while he does blow smoke from time to time, really isn't a precocious pretender. And my apologies to Nicky. Just because.

Nicky said…
Apology accepted, just because. Not that it was necessary, at all. :-)

nonamedufus said…
You know this dragon's from Britain, eh? Have you read Smauggy day in London town?
23 February 2013 at 10:30

nonamedufus said…
I thought I'd apologize now because you may not be speaking to me later. (Ooo, ominous.) I'm glad you enjoyed the dragon tale, Nicky. It sure beats going down in flames.
23 February 2013 at 10:42

Boom Boom Larew said…
I, on the other hand, AM draggin' my ass on this prompt today. The rest of you aren't helping. The more I read, the less I can think of that might be deemed absurdly original.
23 February 2013 at 12:05

Linda R. said…
Love your dragon tale. This was the perfect prompt for creative expression. To bad I wasn't up to the challenge today.
23 February 2013 at 12:55

Ziva said…
Oh, that poor, misunderstood dragon. I kinda want to take care of him and let him come inside, maybe play with some matches, but fire isn't really my friend...
23 February 2013 at 15:18

Katherine Murray said…
Wow that was fascinating! You have such a wonderful imagination and wrote it so well!
23 February 2013 at 21:18

MalisaHargrove said…
What? What? A Dufus post without puns? I don't know if I can make it through the day.

nonamedufus said…
But you weren't in the story today. Your turn was the last train day. And I'm sorry about badgering you.
23 February 2013 at 21:54

mikewjattoomanymornings said…
Ooh! This reminded me of a brilliant little book called Grendel, which was written from the monster's point of view.

But I don't get the ending. There's not absurd about being afraid of birds pecking your eyes out. Because that's what birds do. They peck your eyes out.
24 February 2013 at 03:25

KZ said…
Haha you just couldn't walk away without throwing in your signature pun. The story was sounding pretty somber until the last paragraph. This was a really clever post, by the way. I like where you went with the story.
24 February 2013 at 06:11

nonamedufus said…
I'll have to look for that book. The ending wasn't absurd. The whole story was a little absurd. Sorry. Oh, I already did that.
24 February 2013 at 09:30

nonamedufus said…
With this one I just started writing and let my mind wander. Although when I reached the part about the dragon burning it's face the reference to MikeWJ just came naturally.
24 February 2013 at 09:32

Linda Medrano said…
Fire breathing dragons are wonderful. The birds can be worrisome though, you are so right. This was a very fun flight of fancy!
24 February 2013 at 13:38

nonamedufus said…
Fantastic! Birds might poke out your eyes but a dragon could result in you making a real ash of yourself.
24 February 2013 at 14:52

meleahrebeccah said…
"Let me tell you, if you'd blown fire every day for forty years your face would be a little worse for wear too." - that made me laugh.
24 February 2013 at 16:06