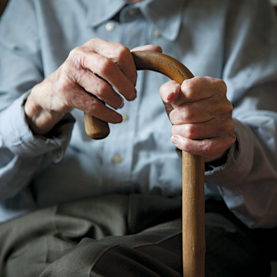 It was sure to be an arduous task. The light in the laundry room had burned out and if he didn't change it soon he'd be recycling his underwear: front to back, back to front, inside out, repeat. He wasn't looking forward to that.

He shuffled across the living room floor with the aid of his cane and then gingerly lifted one foot, then the next, then the cane, step-by-step down the stairs to the basement. With advancing age he didn't move as quickly or as confidently as he once did. Nor did his mind work quite the way it used to. Entering the laundry room and lifting his eyes to the dead bulb in the ceiling, he realized he couldn't reach it and would need the step ladder.

So his tired legs and feet climbed the stairs and shuffled to the kitchen where the phone was. He'd call his grandson and see if he were able to come over and help him.

He slowly punched in the numbers and waited for the ring to be answered. Luckily, his grandson was home from school early that afternoon and said he'd be right over to help.

Oh, that's great he thought. I've got new bulbs, a ladder and now a helper. What a great grandson. I'm all set.

About half an hour later there was a knock at the door. That reminded him his doorbell was out of order and he'd soon have to do something about that, too. With a smile and a "Hey, Grampa" his grandson bounded through the front door and extended his arms in a hug.

After a brief discussion and dispensing with introductory pleasantries the grandson went out to the garage to retrieve the step ladder which hung on the garage wall.

They descended to the basement, one a little slower than the other where the grandson opened up the ladder, climbed up and unscrewed the burned out bulb.

He turned over the bulb to view the wattage and said to his Grampa "It's a 60."

To which his clever grandson replied:

Cheryl P. said…
Again, an awesome post. While the pun at the end was perfect...the story of a grandson being present in an older grandfather's life nearly brings tears to my eyes.
17 February 2013 at 15:13

Indigo Roth said…
Ooooh, you deserve a slap for this one, you big punner!

CaliforniaGirl500 said…
To be honest, I almost cried reading this. My father lived to be 97 and I can relate. You captured the feelings of an older person who can no longer do what they once did. Sweet.
17 February 2013 at 15:16

nonamedufus said…
I'm hoping to be around long enough to have this kind of relationship with my grandkids. They're pretty special.
17 February 2013 at 15:16

nonamedufus said…
I need help. That's the first step towards a cure. Recognizing you need help.
17 February 2013 at 15:54

nonamedufus said…
I was going to say "you're welcome" but then I was shocked to see what you did there. Very clever, Linda. Well done.
17 February 2013 at 18:27

Katherine Murray said…
"he'd be recycling his underwear: front to back, back to front, inside out, repeat."


I never THOUGHT of that!

KZ said…
That is the coolest grandson ever. He's courteous, helpful to his ailing grandfather, and he has the punny sensibilities of Noname. This whole entry was simply awesome.
19 February 2013 at 03:59

Boom Boom Larew said…
Oh, double groan... I should have been expecting something like that. You had me fooled right up until the end.
19 February 2013 at 17:16