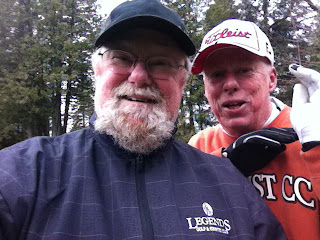 Last year my youngest brother, Whitey (y'all remember Whitey?) asked me what I wanted for my birthday. I said "To go golfing." So, lucky me, he took me golfing on my birthday.

We're still talking about it.

You see my birthday is in late April and as it turned out, while sunny, the mercury didn't get above zero celsius.

Now I've only taken up golf in the last couple of years. I love it and I'm keen to get out on the course and swing the clubs anytime.

Whitey on the other hand has been golfing since he was a kid. He's pretty much seen it all. Except for going golfing when it's 0 degrees.

Look closely at that picture. We look a little red, don't we? It was windy too. And look at my brother  Mr. Whitey "Two Gloves". "Yeah", as he likes to say, "two gloves and three layers of clothing."

The guy's a wuss I tell ya.

This year maybe we'll wait until May or June (see what I just did there?) before we hit the links.

Speaking of links, swing on over to Nicky and Mike's place at We Work for Cheese where you may or may not check out the links of the rest of the club. 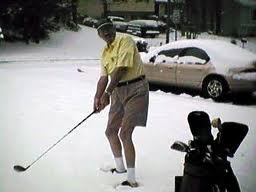 Hey, at least it wasn't this bad!

nonamedufus said…
It's Canadian, eh? 32F for you American types. When are you guys gonna get with the rest of the world. Metric's all the rage these days.
10 February 2013 at 17:30

nonamedufus said…
Believe me it didn't take us long to Finnish. (and you thought the donkey was the worst joke ever?)
10 February 2013 at 17:32

Linda Medrano said…
I am always astounded by the bravery and strength of the male gender. Now, I didn't say brilliance, but don't let that hurt your feelings.
10 February 2013 at 17:33

Cheryl P. said…
I love that you and your brother do things together. Not many siblings would go along with going out in the cold...birthday or not.
10 February 2013 at 17:40

Nicky said…
Very clever, mon ami! Very clever, indeed. I've been to the driving range a couple of times during the summer with Jepeto. I totally suck at it. I can't even imagine playing while freezing my ass off.
10 February 2013 at 17:40

Linda R. said…
Some golfers will suffer all kinds of conditions to golf. That last picture reminds me of a couple friends of ours. A few years ago they were golfing in the snow. They showed us pictures where the golf ball was more like a snowball.
10 February 2013 at 17:47

Katherine Murray said…
That reminds me of some of our hiking outings in the snow where your nose starts running and then it all freezes on your face. "For the love of what you love..."

I tried golfing once... LOVED it. A bunch of us at work played in a tournament with our boss... he was the only one who had golfed before. Guess what! WE GOT THE HIGHEST SCORE! WOOT!
10 February 2013 at 20:45

mikewjattoomanymornings said…
I've golfed four times, but it was always warm. Frustrating, and warm. I cannot imagine being frustrated and cold.
10 February 2013 at 22:09

MalisaHargrove said…
You and your brother look like you might still be up for causing a little trouble. Am I right? It took me about three reads before I found the May...or. Gosh, I'm getting slow.
10 February 2013 at 23:53

nonamedufus said…
Frustrated and cold? I think Whitey would tell you that's redundant, Mike.
11 February 2013 at 08:31

nonamedufus said…
You're very observant, Malisa. We have a third brother and when the three of us get together, watch out.
11 February 2013 at 08:33

KZ said…
Simply brilliant. I'm impressed by the lengths you've gone to in order to contort your way back to the writing prompt. You and your brother look like you were having a good time. Here's to many more years of fun and family. :)
12 February 2013 at 03:33

Cadeaux said…
Cute. I applaud your total disregard for the specific wording of the prompt. :)

nonamedufus said…
I'd rather you drop by late than not at all. This isn't the first time I've disregarded the specific wording of the prompt. And you can be sure it won't be the last.
15 February 2013 at 09:32