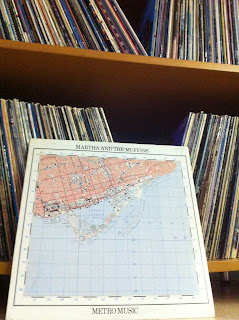 Dance on over to Ziva's for more pics about M&Ms.

Danielle Batog said…
I'm learning a lot from this challenge...had to Google Martha after listening to the video....was so not loving the outfits...hard to believe I had some jumpsuits in my closet at the time also...ick.
24 October 2012 at 08:35

Laughing Mom said…
I was expecting more candy shots and instead get a view of Martha's muffins! You should be ashamed, duf!
24 October 2012 at 12:10

Cheryl said…
Sweeeeeeeeeeeeeet! I love it when you pull out one of your albums from you vast collection of vinyl to share during this challenge. Never heard of them but I love that they were recorded by Metro Music. So many Ms to gush over in this photo.
24 October 2012 at 17:01

meleahrebeccah said…
Thanks for sharing, because I had never heard of them before.
24 October 2012 at 17:26

nonamedufus said…
Well, when I had no candies I knew exactly where to go. My eclectic record collection.
24 October 2012 at 17:32

Cheryl said…
I hear ya. I had a vast LP collection but got rid of 90% of it years ago. Most of the time, I'm fine with that but sometimes I do miss it.


I wasn't raised with music and I've found I concentrate better without it. The only place I have to have music is in the car. Sadly carmakers have yet to create a stereo system that includes a turntable.
24 October 2012 at 18:14